A senior Singapore government official has said that some international news media have misrepresented the events in Hong Kong with "superficial analyses", and the territory will never benefit from the troubles that it is facing.

"If you look at it internationally, outsiders looking in, I think a confused, muddied picture has been presented because international news organizations have dealt with very superficial analysis, engaged in labeling," Kasiviswanathan Shanmugam, the Minister for Law and Home Affairs told Hong Kong's South China Morning Post.

The Hong Kong protests have lasted ten weeks now, even as Chinese and regional leaders condemned them.

On Tuesday, the protesters clashed with police outside the Hong Kong International Airport as the troops sought to gain access into the facility.

The situation forced the Hong Kong airport authorities to suspend flights for a second day with thousands of travelers left stranded.

According to K. Shanmugam, some international media continue to misreport the situation, offering skewed perspectives. He called upon all media outlets to stick to facts while reporting the situation.

"(In their view), all protesters are automatically, generally, democracy-fighters. Police on the other hand, are oppressive, attacking the forces of democracy, using excessive force. 'They're negative, they're an evil force,'" he said, according to transcripts posted on the ministry's website.

The Singaporean urged for calm in Hong Kong, saying the protests were bad for the region.

K. Shanmugam’s sentiments were echoed by Hong Kong’s chief executive, Carrie Lam, who warned that violence was pushing the territory in a dangerous direction.

The United Nations High Commissioner for Human Rights, Michelle Bachelet, also added her voice to the calls for calm in Hong Kong.

In a statement published on her behalf by spokesperson Rupert Colville, she noted that the agency was concerned by the ongoing protests and the escalation of violence that has taken place in recent days.

Bachelet condemned violence or destruction of property and urged the protesters to seek other peaceful alternatives to express their views.

She also noted the Chief Executive’s commitment to “engage as widely as possible” and to “listen to the grievances of the people of Hong Kong.” 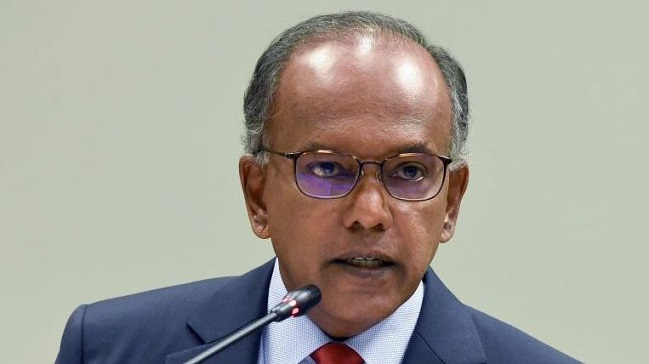 Kasiviswanathan Shanmugam urged for calm in Hong Kong, saying the protests were bad for the region.

Kasiviswanathan Shanmugam urged for calm in Hong Kong, saying the protests were bad for the region.