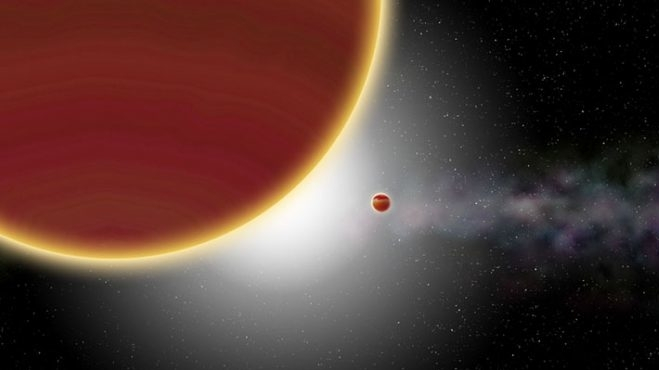 The new planet, b Pictoris c, completes its orbit roughly every 1,200 days (AFP)

The new planet, b Pictoris c, completes its orbit roughly every 1,200 days (AFP)

A second exoplanet has been discovered circling Beta Pictoris, a fledgling star in our own galaxy offering astronomers a rare glimpse of a planetary system in the making, according to a study published Monday.

“We talking about a giant planet about 3,000 times more massive than Earth, situated 2.7 times further from its star than the Earth is from the Sun.” said Anne-Marie Lagrange, an astronomer at France’s National Centre for Scientific Research and lead author of a study in Nature Astronomy.

The new planet, B Pictoris c, completes its orbit roughly every 1,200 days. It is a gassy giant, much like its big sister B Pictoris b.

It is also relatively nearby, just over 63 light-years away and is surrounded by a disk of stellar dust.

Observations show that the two planets are still taking shape.

Beta Pictoris c was discovered by analyzing 10-years’ worth of high-resolution data obtained with instruments at the La Silla Observatory in northern Chile, run by the intergovernmental European Southern Observatory.