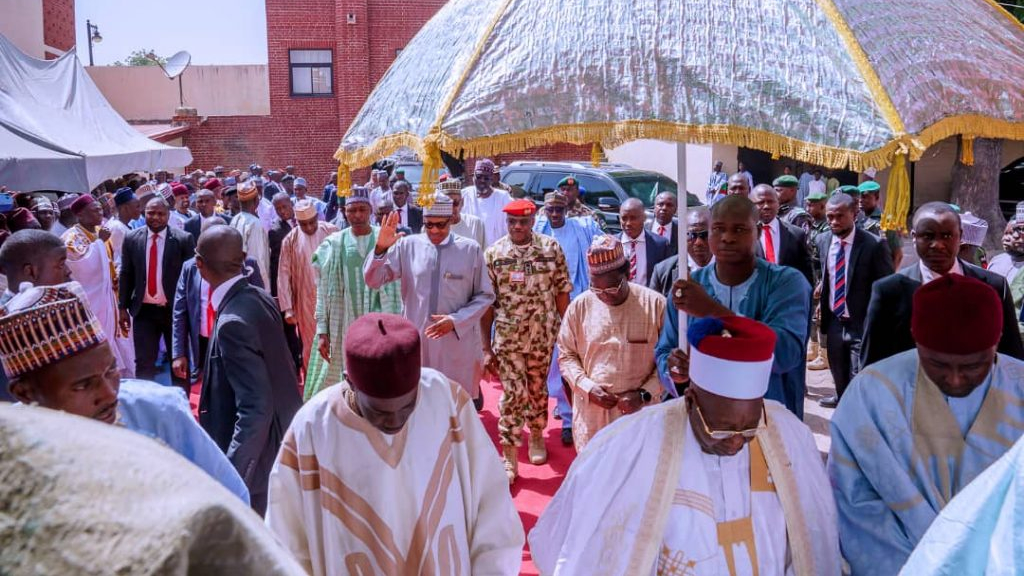 Nigerian President Muhammadu Buhari waves as he walks accompanied by military and state officials in Borno where at least 30 people were killed by suspected jihadists on Sunday. /Photo Courtesy: Nigerian presidency

Nigerian President Muhammadu Buhari waves as he walks accompanied by military and state officials in Borno where at least 30 people were killed by suspected jihadists on Sunday. /Photo Courtesy: Nigerian presidency

Nigerian President Muhammadu Buhari on Wednesday arrived in Maiduguri from Ethiopia to condole with the people of Borno state following an attack on commuters by suspected Boko Haram militants on Sunday night.

At least 30 people were killed in the attack which occurred in Auno village along a major highway which connects to Maiduguri, the state capital. The attack also resulted in the abduction of several women and children and the destruction of 18 vehicles.

The travellers were heading to Maiduguri, when they were forced to stop around 25 kilometres from their destination due to a road block. They were then attacked by the armed men at around 10pm local time.

Islamic State West Africa Province (ISWAP) militants have been active in that area where they set up roadblocks to attack soldiers and civilians.

Images posted online by the Nigerian government showed President Buhari meeting with military and local officials, participating in prayers and walking through the streets under heavy security.

Buhari, who had been in Ethiopia for an African Union Summit, has pledged to secure the release of all the women and children who had been abducted by the militants.

The Nigerian government has attempted to implement a number of strategies to tackle the Islamist insurgency. In September last year, the Nigerian Army said that people who will be travelling through the north-eastern states of Adamawa, Borno and Yobe must carry identification cards in an effort to weed out suspected militants.

Last month, Buhari announced a strategic withdrawal of the country's military from areas in which peace had been restored as the battle to eliminate terrorist elements rages on.

Nigeria has been battling an insurgency by Boko Haram and the Islamic State West Africa in the north for over a decade. The conflict has killed at least 36,000 people and left millions of others displaced in the northeast.