Thousands of Cameroonians flee to Nigeria as violence flares
CGTN 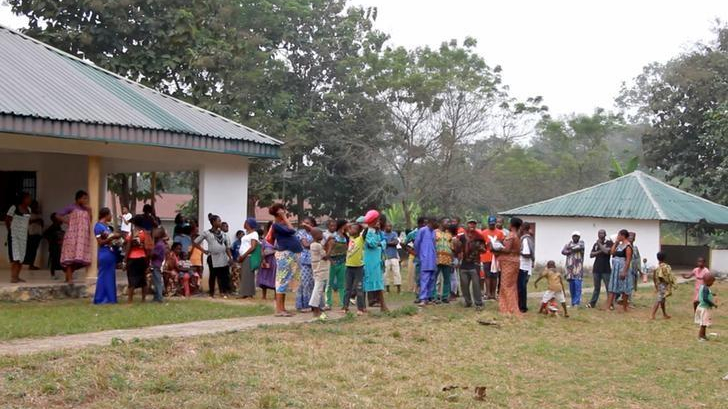 A still image taken from a video shot on December 9, 2017 shows Cameroonian refugees standing outside a center in Agbokim Waterfalls village, which borders on Cameroon, Nigeria. REUTERS/via Reuters TV/File Photo

A still image taken from a video shot on December 9, 2017 shows Cameroonian refugees standing outside a center in Agbokim Waterfalls village, which borders on Cameroon, Nigeria. REUTERS/via Reuters TV/File Photo

Nearly 8,000 Cameroon refugees have fled to eastern and southern Nigeria in the past two weeks, the United Nations refugee agency said on Thursday, as violence flared between security forces and separatist insurgents.

The spike in refugees, coming in the run-up to last weekend’s general elections, brings the total number of Cameroonians who have fled to Nigeria to almost 60,000, the U.N. agency said.

Conflict between Cameroon’s army and English-speaking militias seeking to form a breakaway state called Ambazonia began after the government cracked down violently on peaceful protesters complaining of being marginalised by the French-speaking majority.

The insurgency has forced half a million people to flee their homes and presented President Paul Biya with his biggest challenge since he took power nearly 40 years ago.

The U.N. refugee agency “expects further arrivals as refugees inform that more people are still in remote border areas and could be on their way trying to reach Nigeria,” Thursday’s statement said.

“Refugees reported fleeing violence and some even arrived across the border with gunshot wounds,” it said. “According to new arrivals, most come from areas near the border and have trekked across savannah and forests to reach Nigeria.”

In December, Cameroon’s parliament granted special status to two English-speaking regions to try to calm the conflict, but the separatists said only independence would satisfy them.

The roots of Cameroonian English speakers’ grievances go back a century to the League of Nations’ decision to split the former German colony of Kamerun between the allied French and British victors at the end of World War One.