Washington's buck-passing won't help in its own anti-coronavirus battle 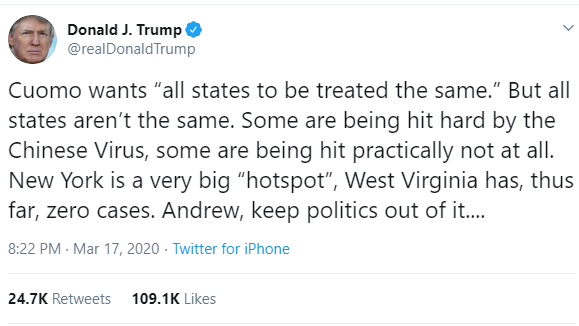 A screen grab of the twitter account of U.S. President Donald Trump, whose second reference to COVID-19 as a "Chinese virus”

A screen grab of the twitter account of U.S. President Donald Trump, whose second reference to COVID-19 as a "Chinese virus”

China on Tuesday expressed strong condemnation and firm opposition to U.S. President Donald Trump's reference to COVID-19 as the "Chinese virus," describing it as an act of stigmatization. A spokesperson for the Chinese Foreign Ministry noted that the World Health Organization and the international community have explicitly opposed connecting the virus with any one country or region and has urged the U.S. to immediately correct its mistake and stop groundless accusations against China.

Over the past few weeks, Chinese people have made great sacrifices and built the first line of defense for global epidemic prevention and control, buying the West valuable time against the spread of the virus. China's efforts have been widely recognized by the international community. But in the United States, some politicians, instead of focusing on epidemic prevention and control, spare no effort in inciting racial discrimination and geopolitical attacks. By labeling COVID-19 the "Wuhan virus" or the "Chinese virus", they are attempting to blame China for their own mishandling of the public health emergency.

Since the first case of COVID-19 was detected in the U.S. on January 20, it took the federal government almost two months to take the issue really seriously and declare a national emergency. Failings have been found in various aspects, including information disclosure, virus testing, and preventing its spread in communities. During a House hearing on COVID-19 testing capacity in the country, Dr. Anthony Fauci, director of the National Institute of Allergy and Infectious Diseases, said "That is a failing. Let's admit it."

Many online users have also questioned the U.S. president's move to label COVID-19 as a 'Chinese virus'. If that's acceptable, some people pointed out, viruses, such as H1N1 and the hog cholera virus, should properly be called "American viruses". Some have observed that they had been "infected with the virus unprotected because of government inaction, not because of China."

Buck-passing is not helpful to the U.S. fight against the pandemic. Paul Haenle, a former U.S. National Security Council official, said "A lot of these emotional and punishment policies will over time come back to bite us." As former Australian Prime Minister Kevin Rudd pointed out in an article published earlier this month, "rather than resorting to thinly veiled racism and isolationist policies, global leaders – particularly the United States – should have started organizing a collective response weeks ago."

Apart from scapegoating, Washington, in an attempt to prioritize U.S. needs, is also reportedly trying to poach German scientists working on a COVID-19 vaccine. A front page report in Germany's Welt am Sonntag newspaper said President Trump had offered he Germany-based company CureVac "a billion dollars" to secure the vaccine "only for the United States." The daily newspaper General-Anzeiger carried a commentary, saying that the U.S. plan has revealed the ugly face of Washington to the world.

Concerns over the U.S. government's incapability to deal with the health emergency have dampened market confidence. Investors rushed to sell shares on the U.S. market, shrugging off the Federal Reserve's move to stem the crisis by cutting interest rates to a record low range of 0-0.25%. The U.S. stock market plunged on Monday, experiencing a market-wide trading halt for the third time in less than ten days, which is unprecedented in the history of the U.S. markets. Without proper settlement of this health emergency, no economic stimuli will work to restore investor confidence in the economy and the market, something the U.S. president needs right now to boost voters' confidence in him.