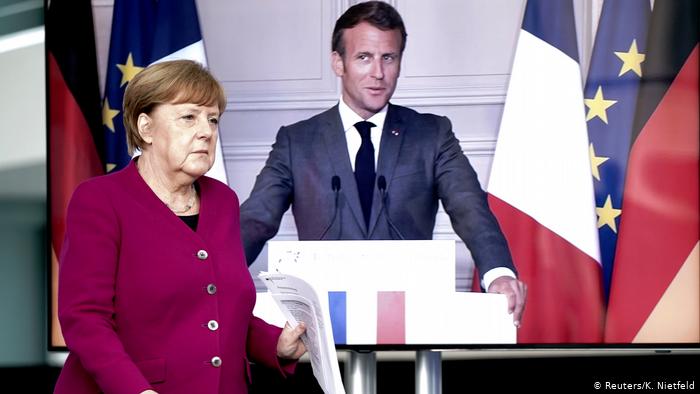 France and Germany have proposed a 500-billion-euro fund to finance the relaunch of the European Union's economy, which is facing the biggest post-war crisis because of the coronavirus pandemic.

Financed by "borrowing from the market in the name of the EU", the fund will flow to the "worst hit sectors and regions" in the 27-member bloc.

Countries benefiting from the financing would not have to repay the sum, said France's President Emmanuel Macron.

"We are convinced that it is not only fair but also necessary to now make available the funds ... that we will then gradually repay through several future European budgets," said Chancellor Angela Merkel.

The borrowing marks a major shift by Germany, which has until now rebuffed Spain and Italy's calls for so-called "coronabonds."

Germany, the Netherlands and other rich countries had seen it as an attempt by the indebted south to unfairly take advantage of the north's fiscal discipline.

It comes as Italian authorities called on ordinary citizens to help fund recovery efforts, as the country's already massive public debt soars further due to the coronavirus crisis

The plan could aid immediate financing needs but will do little to allay eventual default risks.

Italy's public debt has long been seen as a fault-line for the survival of the euro zone, and analysts say the pandemic is raising fresh questions about the sustainability of borrowings.

For now, even with a debt which economists see heading towards at least 170 percent of national output this year, Italy is safe thanks to the European Central Bank's massive bond purchases, recently expanded under its Pandemic Emergency Purchase Programme (PEPP).

But a day of reckoning for the eurozone's third largest economy looks inevitable, analysts say. The country proved unable to lower the world's third highest debt mountain even during economic good times – and it cannot rely on the ECB forever.

"The Franco-German proposals are ambitious, targeted and, of course, welcome," she said in a joint interview with four European newspapers, after announcement of the plan sent the euro higher and reduced Italian bond yields.

"They pave the way for the European Commission to borrow funds over the long term and, above all, they allow a substantial amount of direct support to be provided to the countries most affected by the crisis," Lagarde told newspapers Les Echos, Handelsblatt, Corriere della Sera and El Mundo.