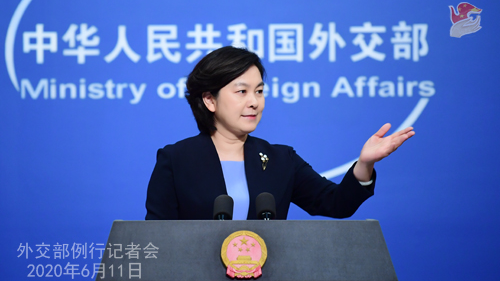 Foreign Ministry spokesperson Hua Chunying at a press briefing on June 11, 2020. /Ministry of Foreign Affairs of the People's Republic of China

Foreign Ministry spokesperson Hua Chunying at a press briefing on June 11, 2020. /Ministry of Foreign Affairs of the People's Republic of China

China will work with all relevant parties to safeguard the authority of United Nations Security Council Resolution 2231, and the effectiveness of the Joint Comprehensive Plan of Action (JCPOA) on Iranian nuclear issue, a Chinese Foreign Ministry spokesperson said on Thursday.

Spokesperson Hua Chunying made the remarks at a press briefing in response to a report which said that the United States has called on the UN to review the importance of renewing the Security Council's arms embargo against Iran. "We have noticed the report," she said.

In a recent letter to the UN Secretary-General and the President of the UN Security Council, Chinese State Councilor and Foreign Minister Wang Yi made a clear standpoint on the Iranian nuclear issue, Hua told the briefing. "Russian Foreign Minister Sergei Lavrov expressed his stand in a letter on this issue too, as we know," she added.

"We urge the U.S. to get back on the right track in terms of fulfilling the JCPOA and the UN Security Council's resolution, and cooperate with all sides to safeguard the international nuclear non-proliferation system, and regional peace and stability," Hua added.