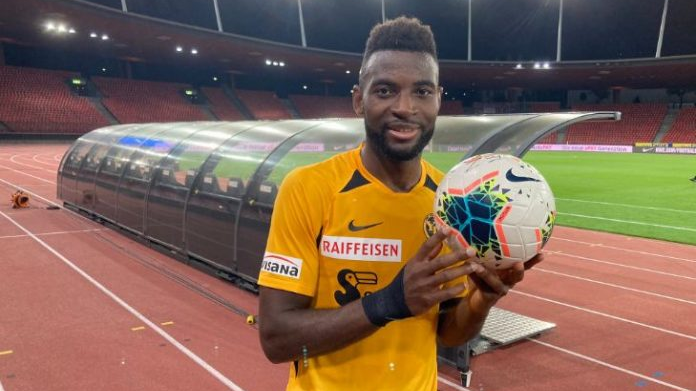 Cameroon forward Jean-Pierre Nsame, who scored a hat-trick for Swiss Super League side Young Boys in a 5-0 win against Zurich. /Social Media

Cameroon forward Jean-Pierre Nsame, who scored a hat-trick for Swiss Super League side Young Boys in a 5-0 win against Zurich. /Social Media

Another round of football in Europe saw the conclusion of another of the so-called big five leagues as Spain's La Liga came to an end and a stunning result in England's premier domestic cup competition. It was a productive outing for African footballers, who mostly played their part in registering important results while some were not so lucky and were on the wrong end of certain events.

We highlight some of the good, the bad and the ugly from the latest round of action across Europe.

In the Championship, Côte d’Ivoire striker Yaku Meite scored for the first time in four games for Reading who lost 4-3 away to Blackburn. It was Meite's first goal since he netted four against Luton on July 4. Elsewhere, DR Congo midfielder Neeskens Kebano scored twice for fourth-placed Fulham who overcame Sheffield Wednesday 5-3. Kebano's compatriot Kazenga LuaLua scored the only goal in Luton's 1-0 win over Hull City to boost their chances of avoiding relegation.

Another DR Congo striker Britt Assombalonga scored 10-man Middlesbrough's only goal in a 3-1 loss at home to Cardiff City. Senegal's Famara Diedhiou missed a second-half penalty for Bristol City who lost 1-0 away to playoff hopefuls Swansea.

Algerian midfielder Ismael Bennacer scored the third goal for Europa League hopefuls AC Milan in a 5-1 thumping of Bologna. Côte d’Ivoire winger Gervinho netted his second goal since the Serie A restart but was unable to prevent Parma from losing 3-2 at home to Sampdoria while Burkinabe midfielder Bryan Dabo was also on target in SPAL's 2-1 away defeat to Brescia.

Relegated Leganes ended Real Madrid's 10-game winning streak with Côte d’Ivoire striker Roger Assale grabbing a late equalizer in a 2-2 draw. Cameroonian midfielder Andre-Frank Zambo Anguissa opened the scoring for Villarreal in a 4-0 win against Eibar to finish the season in fifth. Ghanaian defender Lumor Agbenyenu ended an injury-hit season, which also resulted in relegation, on a positive note scoring for Mallorca in their 2-2 draw against Osasuna.

Cameroon forward Jean-Pierre Nsame scored a hat-trick and set up another goal as Young Boys went to the top of the Swiss Super League with a 5-0 thumping of Zurich. Nsame now has 10 goals in nine matches since the league's restart. Nsame's compatriot Nguomo Ngamaleu and DR Congo's Elia Meshack also set up a goal each in the win. DR Congo forward Ridge Munsy netted a second-half winner as struggling FC Thun stunned St. Gallen, who remained in second, 2-1 and move three points clear of the relegation zone.

Sivasspor reclaimed third spot after goals from Ivoirian Arouna Kone and Mali's Mustafa Yatabare saw them beat Genclerbirgli 2-0 while Angolan midfielder Fredy set up an injury-time winning goal for Adis Jahovic as Antalyaspor edged bottom-placed Ankaragucu. Ghana's Caleb Ekuban set up Trabzonspor's first goal but his side would go on to lose a seven-goal thriller 4-3 at home to Konyaspor.

Galatasaray survived a missed penalty by Moroccan midfielder Younes Belhanda in their 3-1 win against Goztepe. Elsewhere, a brace from Senegal's Mame Thiam was not enough for Kasimpasa who conceded a late equalizer to draw 2-2 against Gaziantep.

Nigerian forward Vincent Boniface was on target as Eliteserien leaders Bodo/Glimt made it nine wins in nine games with a 3-2 win against Mjondalen. Another Nigerian striker James Leke scored his fourth goal in three games as second-placed Molde thrashed Stromsgodset 4-0 while Mali's Ismaila Coulibaly netted for the second time in four games as Sarpsborg 08 made it three wins in four matches with a 2-0 victory over ODD. Brann SK drew 1-1 against Start after Ghanaian forward Gilbert Koomson cancelled out an own goal by Comoros goalkeeper Ali Ahamada.

In the Veikkausliiga, Cameroon's Jean-Marie Dongou opened the scoring for Honka in their 3-1 win against lowly TPS, whose only goal came from Côte d'Ivoire's Mumahed Olawale. Kenyan goalkeeper Arnold Otieno was on the wrong end of a 3-0 defeat as his HIFK side lost at home to Lahti.

Nigerian striker Emem Eduok scored his second goal in five matches for Hajduk Split who lost 3-2 at home against HNK Rijeka in Croatia.

An own goal by Ghana’s Michael Appiah Ofosu denied Trans Narva a win as they drew 2-2 away to Tammeka in Estonia's Meistriliiga.

In Greece, Super League leaders Olympiacos extended their lead to 18 points with a 3-0 win against rivals AEK Athens in which Guinean Mady Camara scored.

In Sweden, Eritrean striker Mohammed Saeid converted a second-half penalty for Sirius in a 4-2 win over Allsvenskan leaders Norrkoping, who pulled one of their two goals back through Nigerian teenager Ishaq Abdulrazak.

Veteran Eritrean forward Henok Goitom scored for a second successive game as his AIK side drew 2-2 away to Varbergs. Helsingborg came from a two-goal deficit, which included an own goal by Congolese defender Ravy Tsouka Dozi, to draw 2-2 against bottom-placed Falkenbergs.

(With input from European Football Leagues)