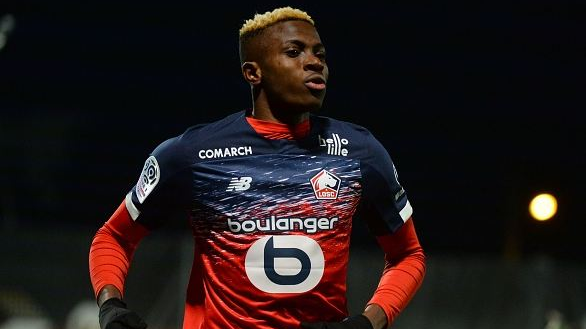 Nigerian forward Victor Osimhen who joined Italian club Napoli from Lille in what is reported to be the most expensive deal for an African footballer. /AFP

Nigerian forward Victor Osimhen who joined Italian club Napoli from Lille in what is reported to be the most expensive deal for an African footballer. /AFP

Italian side Napoli on Friday confirmed the signing of Nigerian striker Victor Osimhen from French Ligue 1 side Lille.

According to French publication L'Equipe, Osimhen was signed for $96 million (about £73 million) the most expensive African player in history.

The reported fee eclipses the $94 million (£72 million) Arsenal paid Lille last year to secure the services of Côte d'Ivoire winger Nicolas Pépé. Osimhen had been signed from Belgian side Charleroi on a five-year contract for a reported $14 million to replace Pépé.

"SSC Napoli are delighted to announce the signing of Victor Osimhen from Lille on a permanent transfer,”the Italian club said on its website.

The club gave no further details of Osimhen's transfer. In recent weeks, he had been linked with a move to Napoli and other clubs such as Manchester United and Arsenal.

The 21-year-old had a successful season in Lille scoring 13 goals in 27 league matches while adding another five in other competitions for an overall tally of 18 goals.

He picked up accolades along the way such as being named Lille's player of the season and winning the 2019/20 Marc-Vivien Foé award for the best African player in Ligue 1. He was also named in Ligue 1's team of the season.