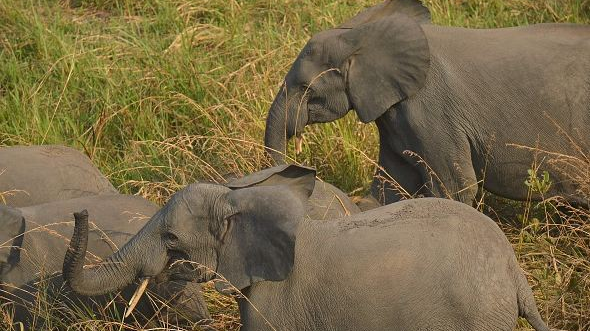 FILE PHOTO: A herd of elephants walking in a park in the Democratic Republic of Congo. / AFP

FILE PHOTO: A herd of elephants walking in a park in the Democratic Republic of Congo. / AFP

Two people were killed by elephants in the southeastern region of the Democratic Republic of Congo, an environmental group, Desk Nature, said quoting a local administrative official.

Pierre Mukamba Kaseya said the incidents, which were separate, occurred when the elephants had been migrating from the Upemba National Park.

"On August 30, there was an incident. The elephants killed a five-year-old child from the Twa community in Kamalondo sector, Kilato village and the second case happened on September 3 where a man was also killed by elephants," Kaseya said.

According to Kaseya, the elephants caused a lot of destruction to fields as they made their way through the area.

A civil society leader named Moise Kiluba urged the national and provincial authorities to intervene and ensure the safety of citizens and their properties and farms.

"The populations of the Kyofwe and Kamalondo sector have difficulty walking for fear of being crushed by these animals," Kiluba said.

Forest elephants are found mainly in countries with relatively large blocks of dense forest, according to the World Wide Fund For Nature (WWF).

The WWF said that African elephants have "less room to roam than ever before" as increasing human populations convert land for agriculture, settlements and developments.

It also cautioned that elephants can also be very dangerous too. Elephants are known to regularly raid and destroy crops as farmers tend to plant crops that they like to eat.