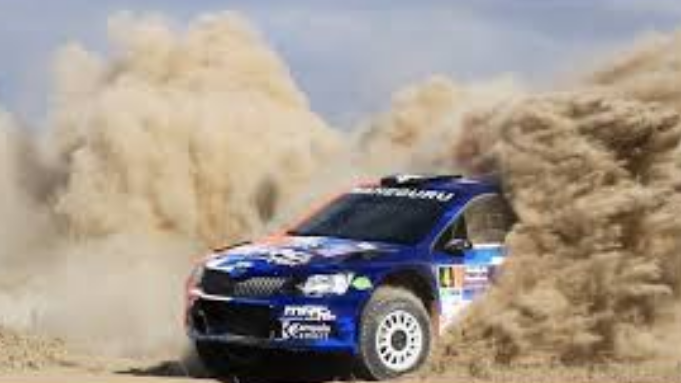 The clock is ticking for the motorsport fraternity across Africa before the World Rally Championship (WRC) returns to the continent in July next year with Kenya's Safari Rally.
The iconic event, dubbed 'world's toughest rally', was the crown jewel on the WRC calendar until 2002 when it was withdrawn from the roster due to lack of government financial guarantees and safety concerns.

Since 1973 when it was included in the WRC, the Safari Rally gained motorsport fame and infamy due to the arduous conditions, such as the constantly changing weather and the very rough roads often rife with sharp rocks that made life very difficult for the crew.

Now with its return imminent in 2021 after the 2020 comeback was postponed due to the pandemic, CGTN Africa has prepared a series of engaging WRC Safari Rally package stories that will culminate with a special edition of its weekly show, Sports Scene, at 1800GMT (2100EAT, 2000 CAT) on Saturday.

"We are committed, and I repeat, committed, to meeting all international automobile federation (FIA) regulations, standards, requirements, so that Kenya may once again feature at the apex of global rallying,” Kenya's president, Uhuru Kenyatta, affirmed during the start of the 2019 Safari Rally that was a WRC Candidate Event.

And as CGTN's Mutuiri Mutuota reports, a year on and despite the delay occasioned by the pandemic, organizers are busy putting together the event that will have its ceremonial start at Moi International Sports Center  Kasarani in Nairobi on July 16 before heading to the Rift Valley region of Naivasha where the closed-circuit rally will run until July 19.

"In our days, I competed for many years in the Safari, in the old format, when it was 5000kms, we used to run on open roads, drive day and night. These days the service park is a crucial part of any event, the cars are only serviced at a central point, now that means the cars have got to run in a clover setup where they are able to come back anytime they leave for refueling and mechanical checks, repairs and so on,” Phineas Kimathi, the WRC Safari Rally CEO, told CGTN Africa.

Most of the event will run inside the scenic Hell's Gate National Park with its spectacular scenery including the towering cliffs, water-gouged gorges, stark rock towers, scrub clad volcanoes, and belching plumes of geothermal steam providing an ideal backdrop for the 2021 WRC Safari Rally to reconnect with its roots.

"All other areas as you would see, we have not interfered with any flora and fauna, and even as we work, we have quite a lot of wildlife within this institute, we have the giraffe, we have Eland, Impala, Zebra, the buffalo will sometimes migrate from the lake, to come up but not very often. You know it's a Safari in the wild, and they are looking forward to having it," Anthony Gatei, the Service Park Manager at Hell's Gate reaffirmed.

The return of the Safari to the WRC has stoked passion among the motorsport family from around Africa.

"I definitely think that the return of the Safari rally to the continent will draw more interest in the sport and hopefully more young people in you know, interested in the sport like myself and who knows, one day I might just be a competitor in the Safari Rally,”Letsego Zulu, a female off-road navigator from South Africa who is seeking to make it big in a male-dominated sport, gushed.

Former Safari champion and Zimbabwe rally legend, Conrad Rautenbach, who took the 2007 crown when the event was around in the Africa Rally Championship (ARC), described the allure that attracts motorsport enthusiasts to be part of its rich history.

"We were six guys in total, myself the navigator, mechanics, all Zimbabweans. It took us three or four days to drive up to Kenya with the car so it was more of an adventure and it was great to go and beat the factory teams and the sponsored teams from Europe and all over.

"To be successful you have to move overseas, to Europe. The first step in South Africa that's the most competitive but If you want to compete in a world stage you almost have to move abroad to do that which is a shame because you don't bring the skills and knowledge back here to Africa. But with bringing the Safari Rally back that's the first stage," the Harare-based speed merchant held.

Kenya's Ian Duncan remains the last African to win a WRC Safari Rally and speaking from his garage in Nairobi, the seasoned ace was effusive about its return to the global circuit.

"We had many great years, I've done a lot of Safari Rallies; I don't even remember how many, winning it was always a good memory for us, we will always remember, but even like the first podium, the first works drive we got. We had lots of good memories and some really great fun times," Duncan added.