Peace accord sparks celebrations in Azerbaijan, fury in Armenia
CGTN 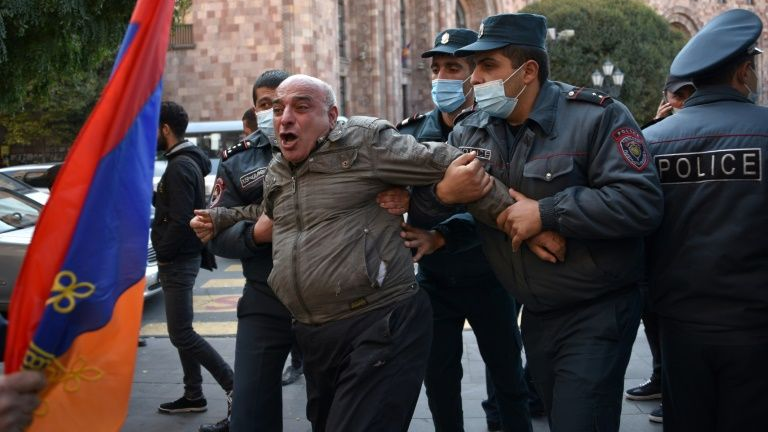 Pashinyan announced a Russian-brokered peace agreement with Azerbaijan over the disputed Nagorno-Karabakh in the early hours of Tuesday, ending weeks of intense fighting that left more than 1,400 dead and displaced tens of thousands.

The peace accord sparked celebrations in Azerbaijan but fury in Armenia, where demonstrators stormed government buildings and demanded Pashinyan's resignation earlier this week.

More than 400 Russian peacekeepers deployed on Wednesday to Nagorno-Karabakh where fierce clashes had raged for more than six weeks between Armenian separatists and Azerbaijan's forces.

In the Armenian capital Yerevan, police hauled off demonstrators from a gathering of several thousand protesters who were shouting anti-Pashinyan slogans and calling the prime minister a "traitor" in front of government headquarters.

"You will not be able to stop the whole country," a member of the Prosperous Armenia party, Arman Abovyan, shouted through a megaphone to protesters who had rallied despite a ban on public gatherings while martial law was in place.

Police said 135 people were detained and then released. High-profile opposition figure Gagik Tsarukyan was among those detained.

"Azerbaijan was winning militarily and Armenia faced a crushing defeat. But humiliation cannot be a strong basis for sustained peace," the International Crisis Group warned in a report on Wednesday.

Clashes between Azerbaijan and Armenian separatists broke out in late September.

More than 1,400 people were confirmed killed, including dozens of civilians, but the real death toll is believed to be significantly higher.

Speaking with wounded servicemen on Wednesday, Azerbaijani President Ilham Aliyev accused Armenians of destroying "99 percent of the liberated territory" including hospitals, houses and monuments, adding that he wanted Armenia to pay compensation.

"They will have to answer for their dirty deeds," he said.

The peace deal stipulates that Azerbaijan's forces will retain control over areas seized in the fighting, including the second-largest town of Shusha, while Armenia agreed to a timetable to withdraw from large parts of Nagorno-Karabakh.

As part of the accord, a Russian force of 1,960 military personnel and 90 armored personnel carriers are deploying to the region as peacekeepers for a renewable five-year mission.