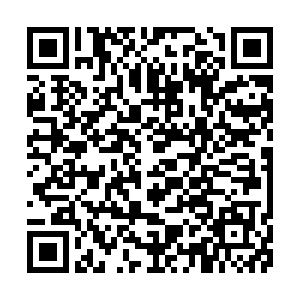 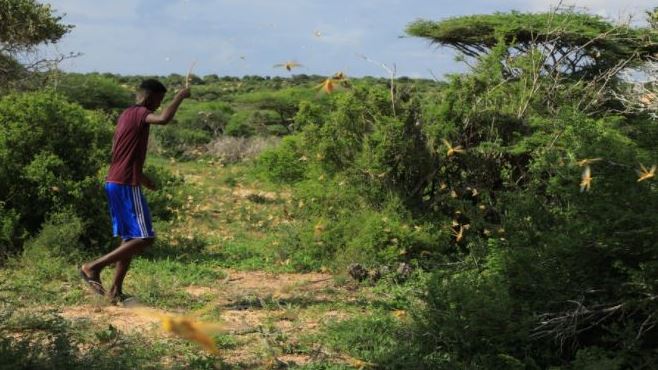 A Somali man attempts to fend off desert locusts in a grazing land at Daynile neighborhood, outskirts of Mogadishu, capital of Somalia, on Nov. 7, 2020. (Xinhua/Hassan Bashi)

A Somali man attempts to fend off desert locusts in a grazing land at Daynile neighborhood, outskirts of Mogadishu, capital of Somalia, on Nov. 7, 2020. (Xinhua/Hassan Bashi)

Somalia and the Food and Agriculture Organization of the United Nations (FAO) said they have stepped up the fight against desert locusts.

The FAO warned on Friday that large populations of desert locusts in Somalia have moved toward southern parts of the country while widespread hatching and hopper band formation continues.

Etienne Peterschmitt, FAO representative in Somalia, said survey and control operations, by ground and by air, have been scaled up.

"These resources include aircraft, vehicles, equipment, biopesticides, insect growth regulators and staff that have been strategically positioned in various parts of the country," Peterschmitt was quoted as saying in a joint statement issued in Mogadishu.

The areas most affected, according to the UN food agency, include Sool, Nugal, Mudug regions in Puntland and most of Galmudug.

Anti-locust operations focus on the central and southern areas at risk.

According to the FAO, a recent shift of winds has pushed the insects into southern Somalia, threatening a potential re-invasion in the coming weeks into northern Kenya.

Most recent reports include sighting of mature locusts in Southwest State as well as in Jubaland, the FAO said.

Somali Minister of Agriculture and Irrigation Said Hussein Iid said the current desert locust upsurge in the country is the worst ever experienced in decades.

"However, since this protracted crisis started in December 2019, Somalia's capacity to respond has been strengthened thanks to concerted efforts by the government and FAO," he said.

"This is an extremely difficult pest to manage, one that reproduces at lightning speed," Owuor said. "The winter breeding season is ongoing and in the coming months we expect to see more desert locust populations, especially since new generations are already hatching."