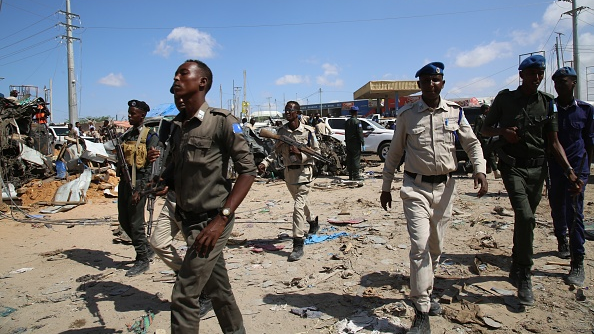 FILE PHOTO: Security forces sent to a site after a bomb attack carried out at a checkpoint in Somalia's capital Mogadishu. /Getty Images

FILE PHOTO: Security forces sent to a site after a bomb attack carried out at a checkpoint in Somalia's capital Mogadishu. /Getty Images

A majority of youth in Africa are concerned about incidences of terrorism in the continent, according to a survey commissioned by the South Africa-based Ichikowitz Family Foundation.

The results of the survey, titled African Youth Survey 2020, saw more than 4,200 young people aged 18-24 interviewed in 14 African countries. The results were released against the backdrop of increased terrorism-related incidences in parts of the continent.

Terrorist groups have been active this year with several fatal attacks being reported in a number of countries such as the DR Congo, Somalia, Nigeria, Mali, Chad and lately Mozambique.

Those figures rise sharply in certain countries which have been victims of terrorist attacks, like Mali (99 percent), Kenya (89 percent) and Nigeria (86 percent), or have experienced some unrest within their territories like Ethiopia (86 percent).

Mali, particularly its central region, has been plagued by deadly ethnic and jihadist violence since 2012 when a revolt broke out leaving thousands of people dead and thousands of others displaced.

International and regional powers fear political instability in Mali, which was rocked by a coup a few months ago, could undermine their military campaigns against Islamist militants in West Africa's Sahel region.

With that in mind, at least six in 10 Kenyans (63 percent) said they were concerned about instability in the Horn of Africa nation and South Sudan which is struggling to maintain the peace deal signed in September 2018.

Nigeria, meanwhile, has been battling an insurgency by Boko Haram and the Islamic State West Africa Province (ISWAP) in the north and northeast for over a decade which has killed at least 36,000 people and left millions of others displaced in the region and the general Lake Chad Basin.

More than two-thirds of respondents (69 percent) in Nigeria said the activities of Boko Haram affect their lives daily. Encouragingly, more than half of respondents (55 percent) said they were confident in their government's ability to counter the threat posed by the jihadist group.

Respondents in East and West Africa reported the greatest concern over terrorism with 78 percent and 76 percent respectively compared to southern Africa (66 percent).

Mozambique has emerged as the country in southern Africa with significant concerns about terrorism and insecurity, particularly in its northern region.

Militant attacks in Mozambique's Cabo Delgado province, which began as far back as 2017, have seen a surge in intensity this year. Insurgents have taken control of important towns for short periods and targeted military and other key targets.

"Respondents were asked if they or anyone they knew were ever approached by a terror network. While eight in ten overall reported that they have never been approached by or associated with such groups, a sizable number of participants responded that they 'did not know' or chose not to answer, the survey said."

15 percent of youth said terrorism had the second greatest impact on the continent in the last five years behind "deaths from infectious diseases" 24 percent.

"Looking ahead to the next five years, concerns of terrorism are viewed as the sixth-biggest issue facing the continent, with corruption and job creation viewed as the most pressing issues that must be addressed to move the continent forward. When asked about which issues are young people most concerned about in their country today, terrorism drops to the ninth position; unemployment and corruption remain the top issues wherein young people are presently the most concerned," the survey said.

South African industrialist and philanthropist Ivor Ichikowitz appealed to African governments to urgently step up efforts to curb the spread of terrorism and its evolution in to a much bigger problem for the continent and the world.

"While perhaps a fleeting headline flashing across news screens abroad, here in Africa, our study indicates that our young citizens are nearly one degree of separation away from extremist violence. They are the targets for recruitment by terrorist organizations, factions that have historically and routinely exported their tactics and their members abroad," Ichikowitz noted.

In March, the UN Security Council called for greater international support to African countries in their continued fight against terrorism and violent extremism, particularly in parts of the Sahel, the Lake Chad Basin region and the Horn of Africa.

(With input from Ichikowitz Family Foundation)