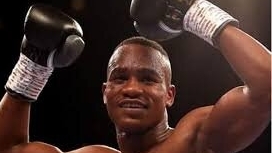 Despite the impact of the COVID-19 pandemic in sport, 25-year old Tanzanian boxer Hassan Mwakinyo had a 2020 to remember. In November, the African professional boxer stopped Argentinian boxer Jose Carlos Paz via a fourth round technical knockout to win the World Boxing Federation super-welterweight intercontinental title.

The East African boxer, lives by the motto "Train hard, fight easy". Despite 2020 being a hard year for global sports, the boxer kept at it by training and now his hard work, sweat and tears have paid off.

He rose to become one of East Africa's fastest-rising talents after claiming a title from a major international organization: The WBF super-welterweight intercontinental title

Hassan Mwakinyo, WBF Super-welterweight Intercontinental champion  says, "My dreams are to keep being world champion. That's all I pray for, and what my mother prays for. I believe only God knows which path I should take to get there. But those are my dreams. I won't say it's this person who will get me there. It's all up to God but I will keep training hard and I ask people to support me."

Mwakinyo has been adding to his growing list of wins in the last two years including against Argentina's Sergio Eduardo Gonzalez and England's Sam Eggington - victories that have helped him climb the rankings.

The boxer is now rated 42nd out of 2,077 boxers globally in the recently-released rankings by the Boxrec.

Kelvin Twissa from Jackson Group Sports has taken over managing the fighter. He says the future looks bright.

"This has definitely been Mwakinyo's year. To be able to put on two fights given that the whole world shut down. Even in Tanzania at some point, there were no sports happening. So we needed a win. We needed some gleam of hope beyond football which has performed pretty well for Tanzania in the last couple of years. And as an individual, i think he totally stands out as one of the best that performed in 2020." Kelvin Twissa, Managing Director, Jackson Group Sports submits.

The organizer of Mwakinyo's last event says despite Tanzania having great athletes, sports management is still a challenge.

He says more needs to be done to market the talent to sponsors so as athletes like Mwakinyo can get well paid and change lives.

"And the gap exists in lack of amplification of the success and failures of athletes in this part of the world. So what you find is you have great athletes that no one knows about."

Although he grew up in humble beginnings, Mwakinyo's star continues to grow in 2020.

With each fight, he is changing perceptions that Tanzanians won't spend money to come to enjoy a high-value boxing event.

Mwakinyo is expected to fight again in March of 2021. This will be for the defense of his  World Boxing Federation super welterweight world title after his knockout win against Jose Carlos Paz of Argentina last month.

Fans and supporters across East Africa are eager to see what 2021 has in store for Tanzania's rising star.