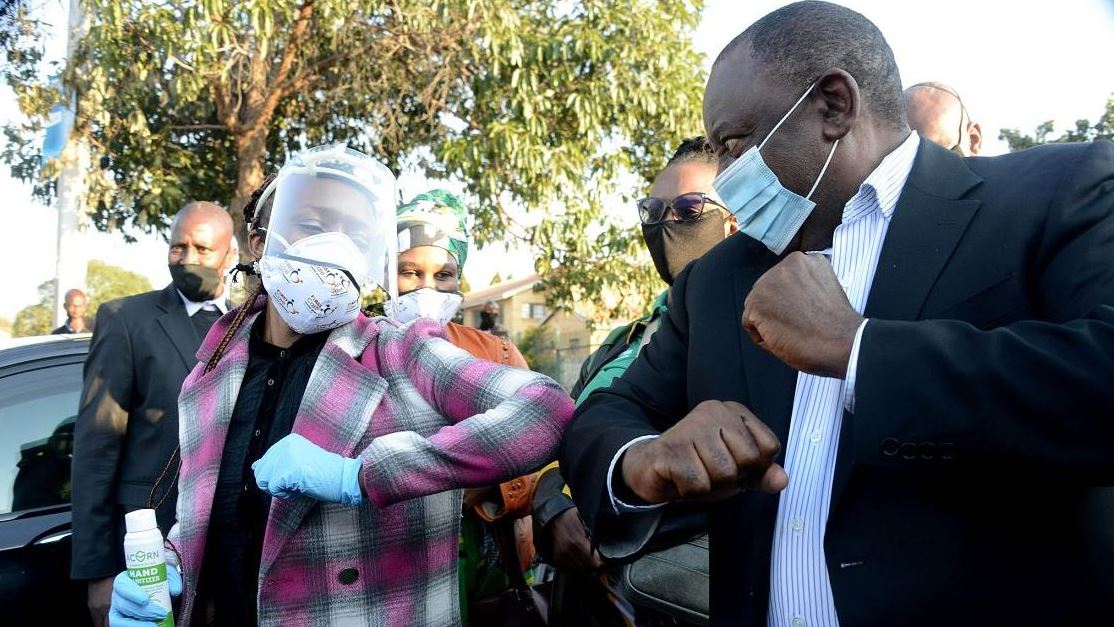 South African President Cyril Ramaphosa bumps elbows with an attendant at a past function. /VCG

South African President Cyril Ramaphosa bumps elbows with an attendant at a past function. /VCG

South African President Cyril Ramaphosa on Monday announced that the country was adjusting its COVID-19 lockdown from Level 1 to Level 3 immediately following an upsurge in new infections.

The president made the announcement during his national address that came just a day after the country's virus load surpassed the one million mark.

"Several of the Level 3 regulations are being strengthened to further limit the potential for transmission, while doing everything possible to keep the economy open," said Ramaphosa.

Some of the regulations under the Level 3 regulations include a ban on all indoor and outdoor gatherings for 14 days with a few exceptions, the extension of a nationwide curfew to run from 9PM and end at 6AM, and the mandatory wearing of face masks by all persons while in the public.

The president said that persons who do not wear a mask could be arrested and prosecuted, noting that they will be liable to a fine or to imprisonment for a period not exceeding six months or to both a fine and imprisonment.

With 1,004,413 confirmed cases, South Africa has reported more than twice the number of infections registered by the African country with the second-most cases. It has also recorded 26,735 COVID-19 related deaths.

A new coronavirus variant - known as 501.V2 - is believed to be responsible for the new wave of new infections.

"We will all have heard that there is a new variant of COVID-19 that is now well-established in our country," Ramaphosa said in his address.

He noted that while the new variant of the coronavirus appears to spread more rapidly, the increase in new infections may also have been fueled by super-spreader events including end-year events, family gatherings and social functions.

He urged South Africans to continue adhering to the laid down health protocols to curb further spread of the virus.