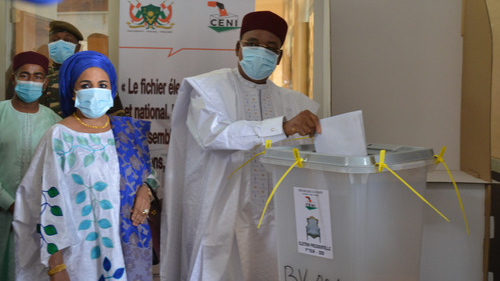 The ruling party's presidential candidate in Niger, Mohamed Bazoum, held a large lead in the first partial results from Sunday's election, although his early score was short of the 50 percent he would need to avoid a second round.

Based on results published late on Monday by the electoral commission from 23 of 266 voting districts, Bazoum received nearly 40 percent of the vote, ahead of his nearest challenger, former president Mahamane Ousmane, who had about 16 percent.

Bazoum, a former interior minister, is considered a strong favourite to succeed President Mahamadou Issoufou, who is stepping down after two five-year terms leading the country of 23 million.

A smooth handover would mark the first transfer of power between two democratically elected presidents. Niger has experienced four coups since independence from France in 1960.

The new president will face rising violence from Islamist militants whose attacks have killed hundred of civilians and soldiers in the last year alone, although few security incidents were reported on election day.

The remaining results are expected to be announced in the coming days. If none of the 30 candidates receives a majority of the first-round vote, a run-off will be held in February.