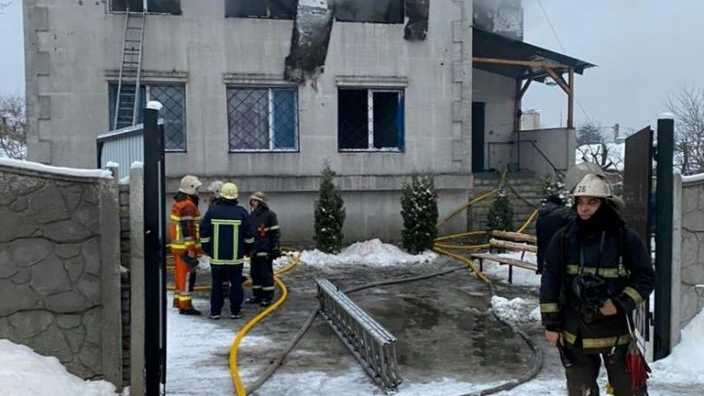 Firefighters work at the site of a fire in a nursing home in Kharkiv on January 21, 2021. /AFP

Firefighters work at the site of a fire in a nursing home in Kharkiv on January 21, 2021. /AFP

At least 15 people were killed Thursday after a blaze tore through a residential home for the elderly in the eastern Ukrainian city of Kharkiv.

The fire broke out in the second storey of the home in the ex-Soviet republic, which is one of the poorest countries in Europe and suffers from an ageing health care system.

Ukrainian President Volodymyr Zelensky described the incident as "a terrible tragedy" and said 33 people had been in the building when the fire broke out.

Photos distributed by the emergency services showed smoke billowing from charred windows on the second floor of the building, while firefighters in heavy coats worked to assess the damage.

Zelensky confirmed the death toll of 15 reported by emergency services, adding: "We all pray that there will be no more."

It was not clear in the immediate aftermath of the fire how many of the survivors were taken to nearby medical facilities for treatment.

The emergency services reported nine people had been admitted to nearby hospitals while Prosecutor General Iryna Venedyktova said 11 people were injured.

She said the authorities were investigating the misuse of electric heaters as a possible cause of the blaze.

Deadly fires are not uncommon in Ukraine, where compliance with safety regulations is poorly enforced and ageing infrastructure is badly maintained.

In December 2019, a fire killed 16 people and injured 30 others at a higher education institution in the Black Sea city of Odessa.

The director was later arrested on charges of negligence.

In August the same year, a fire in a hotel in Odessa killed nine people.