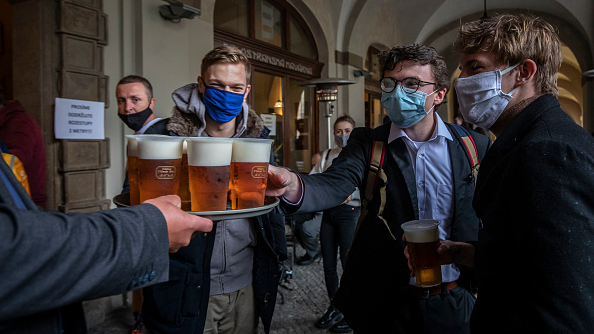 Several pubs and restaurants across the Czech Republic opened for business on Saturday in protest against strict COVID-19 restrictions by the government which forced them to close since late last year.

Several establishments had signed up to join the protest organised by the Chcipl pes (Dog is dead) movement; the name refers to the government's anti-epidemic PES (DOG) system implementing the restrictions.

Some establishments were doing brisk business during lunchtime as patrons ate and drank with their staff in full operation.

Jiri Janecek, manager at the Maly Janek brewery and restaurant in Jince southwest of Prague, told AFP that the owners were "disappointed" with the government and wanted to show authorities they had "chosen the wrong way".

"We've had enough and we think the ministers should consider quitting their posts."

The spokesman of the capital Prague's city hall Vit Hofman said the open restaurants faced a fine of up to 20,000 crowns ($932) for violation of the regulations.

The government had ordered bars, pubs, restaurants and non-essential shops to close their doors since October last year, with the exception of a brief easing period before Christmas, in response to a new rise in infections.

At the time, the Czech Republic went into its second coronavirus lockdown after its per capita case and death rates surged to levels which were among the highest globally.

Earlier this month, hundreds of protesters had also gathered in the capital Prague with empty beer glasses to protest against the closure of pubs and restaurants.

The Czech Republic has so far reported 917,359 confirmed cases and 14,973 deaths, according to data from the Johns Hopkins University.