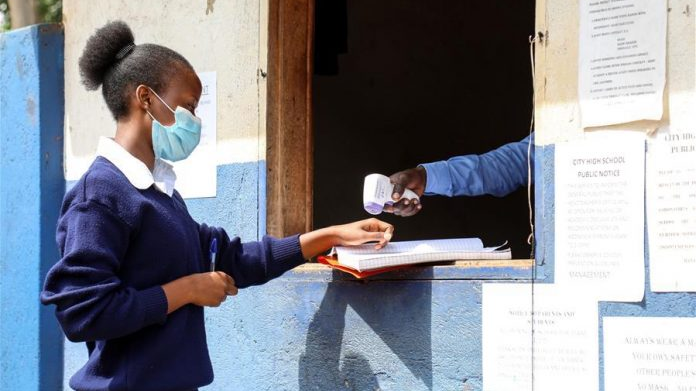 Last year, more than 180 countries temporarily closed their schools, leaving close to 1.7billion children and youth out of school when closures were at their peak. /Xinhua

Last year, more than 180 countries temporarily closed their schools, leaving close to 1.7billion children and youth out of school when closures were at their peak. /Xinhua

Last year, more than 180 countries temporarily closed their schools, leaving close to 1.7 billion children and youth out of school when closures were at their peak.

The pandemic deprived children in the poorest countries of almost four months of schooling, compared with six weeks for children in high-income countries. For an estimated 32.8 million children and youth, this would be the last time they ever attended school or university.

At least one million pregnant school-age girls risked losing their access to education in sub-Saharan Africa at the end of COVID-induced school closures while globally, 13 million more child marriages are projected to take place by 2030 due to school closures and increased poverty resulting from the pandemic.

It has been estimated that the pandemic will reverse the gains of the last 20 years of global progress made on girls' education, resulting in turn in increased poverty and inequality.

The financial impact of school closures in terms of reducing future earnings is estimated to be between 3 percent and 15 percent of future GDP. Children who need education the most to climb out of poverty are those who are most likely to be left behind.

Poorer students in both high- and low-income countries are less able to access distance learning programmes, and tend to fall further behind in the absence of additional support.

In Latin America and the Caribbean, only 30 percent of children from poor families have access to a computer, compared with 95 percent of children from rich families. Ethnic and linguistic minorities are also disadvantaged by distance learning since they are less likely to be taught in their mother tongue during online lessons or to have printed materials in this language sent to their homes.

Girls, who before the pandemic already spent 40 percent more time doing household work than boys, are seeing their education put at further risk; two-thirds of girls are doing more household chores and over half of girls report spending more time caring for siblings during the pandemic.

Additionally, access to mobile Internet services that would allow them to access digital learning is 26 percent lower for girls and women compared with boys and men globally.

Efforts to mitigate the impact of this great and growing education divide risk being severely undermined by budget cuts in the education sector.

Before the pandemic, the annual spending gap in education was estimated at $148bn, but this now looks set to increase by an extra $30–40bn, unless urgent corrective measures are taken.

Meanwhile, wealthier families are getting by. Across the world, they have been able to pay for supplementary education opportunities. In the US, for example, many wealthy, predominantly White families are pooling their resources to hire private tutors to teach their children in their homes in small private groups known as 'pandemic pods'.

Mega-corporations are also taking advantage of the pandemic to maximize profits from the lucrative $6.3 trillion 'edtech' market.