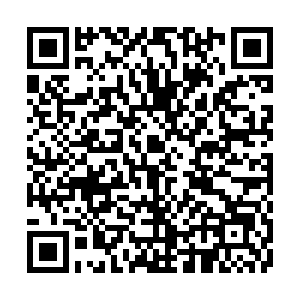 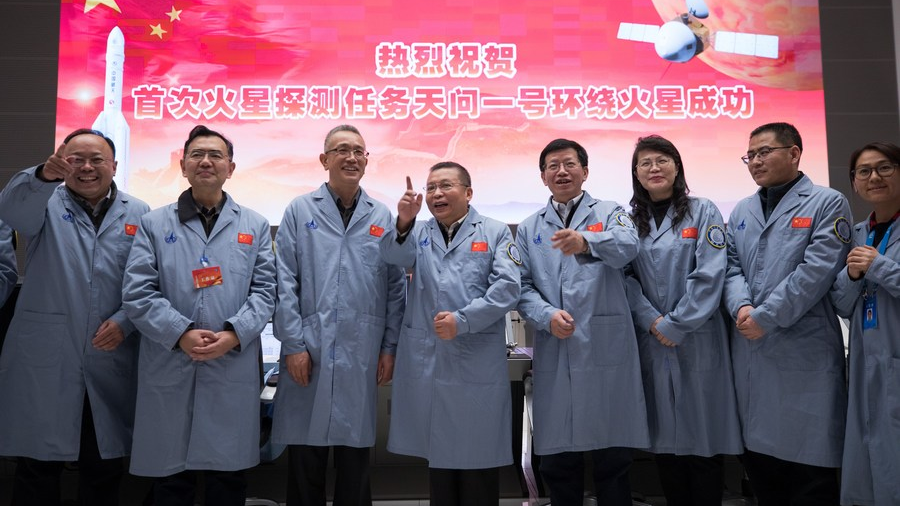 China's Tianwen-1 probe successfully entered the orbit around Mars on Wednesday after a nearly seven-month voyage from Earth.

"Tianwen-1 entered the orbit around Mars exactly as it was designed," said Zhang Rongqiao, chief designer of China's first Mars exploration mission. "We are looking forward to a successful landing on Mars."

It marks the first time that a Chinese spacecraft has orbited an extraterrestrial planet, he noted.

A 3000N engine was ignited at 7:52 p.m. (Beijing time) to decelerate Tianwen-1, according to the China National Space Administration (CNSA).

After about 15 minutes, the spacecraft, including an orbiter, a lander and a rover, had slowed enough to be captured by Mars' gravity and entered an elliptical orbit around the red planet, with its closest distance from the Martian surface at about 400 km. It will take Tianwen-1 about 10 Earth days to complete one circle.

The development marks China's completion of a key step in its current Mars exploration program, which is designed to complete orbiting, landing and roving in one mission, said the CNSA.

After entering the Mars orbit, payloads aboard the orbiter, including cameras and various particle analyzers, will next start working and carry out surveys of the planet.

Tianwen-1 was launched via a Long March-5 rocket, China's largest launch vehicle, from the Wenchang Spacecraft Launch Site on the coast of southern China's island province of Hainan on July 23, 2020.

Tianwen-1 has been traveling in space for 202 days. It has carried out four orbital corrections and a deep-space maneuver. It has flown 475 million km and was 192 million km from Earth when it reached the Mars orbit.

A steerable radio telescope with a 70-meter-diameter antenna in Wuqing District of northern China's Tianjin City is a key facility receiving scientific data sent back by the Mars probe. The one-way communication delay is about 10.7 minutes.

Tianwen-1 will now conduct multiple orbital corrections to enter a temporary Mars parking orbit, surveying potential landing sites in preparation to land in May or June.

The most challenging part of the mission will be the soft landing, an autonomous process of the probe lasting seven to eight minutes. The probe will use its aerodynamic shape, parachute and retrorocket to decelerate and buffer legs to touch down.

Chinese space engineers and scientists have chosen a relatively flat region in the southern part of the Utopia Planitia, a large plain, as the potential landing zone.

The site was selected for its conditions for a safe landing and scientific research value. The place has not been investigated by other countries, so the scientific data can be shared with other countries to enrich the world's understanding of Mars.

Earlier research showed the potential landing site might be the edge of an ancient ocean or lake in the early history of Mars. Chinese scientists are looking forward to finding more evidence of water-ice.

The rover will be released after the landing to conduct scientific exploration with an expected lifespan of at least 90 Martian days (about three months on Earth), and the orbiter, with a design life of one Martian year (about 687 days on Earth), will relay communications for the rover while conducting its own scientific detection.

The scientific goals include mapping the morphology and geological structure, investigating surface soil characteristics and water-ice distribution, analyzing the surface material composition, measuring the ionosphere and the characteristics of the Martian climate and environment at the surface, and perceiving the physical fields and internal structure of Mars.

The Mars mission has attracted active participation of non-governmental research agencies, with more than 600 domestic organizations joining the development of the probe system alone.

Extensive international cooperation has also been carried out. China works with the European Space Agency and Argentina in the mission's measurement and control, and with France and Austria in the calibration of multiple payloads and data analysis.

If China can succeed in orbiting, landing and roving with Tianwen-1, it will take the challenge of collecting and bringing back samples in the next Mars mission, as well as exploring asteroids and the Jovian system, said Geng Yan, an official at the Lunar Exploration and Space Program Center of the CNSA.

Tianwen-1 means Questions to Heaven and comes from a poem written by Qu Yuan (about 340-278 BC), one of the greatest poets of ancient China. The name signifies the Chinese nation's perseverance in pursuing truth and science and exploring nature and the universe, according to the CNSA.