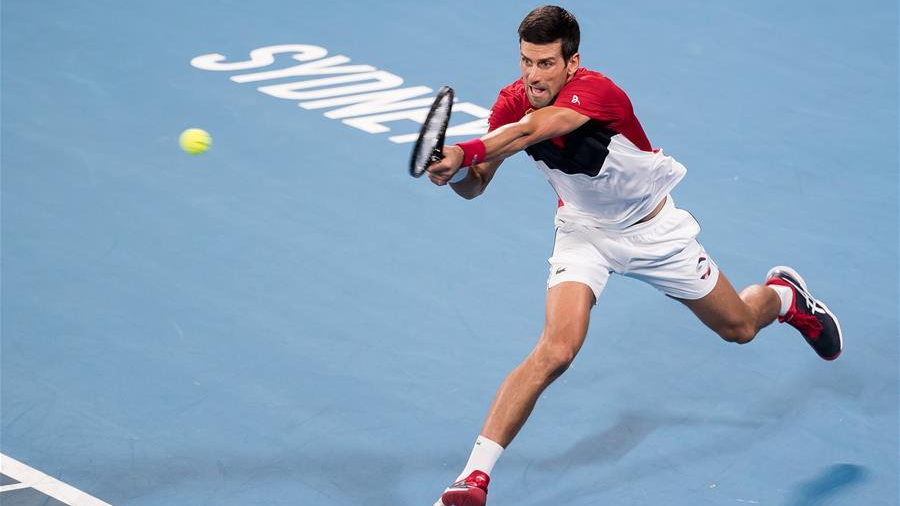 Novak Djokovic of Serbia competes against Rafael Nadal of Spain during the ATP Cup final between Spain and Serbia in Sydney, Australia, Jan. 12, 2020. /Xinhua

Novak Djokovic of Serbia competes against Rafael Nadal of Spain during the ATP Cup final between Spain and Serbia in Sydney, Australia, Jan. 12, 2020. /Xinhua

Reigning champion Novak Djokovic came through a tough examination of his fitness as the top seed beat Canadian powerhouse Milos Raonic 7-6(4) 4-6 6-1 6-4 on Sunday to reach the Australian Open quarter-finals.

Djokovic, who injured a side muscle during a five-set win over Taylor Fritz on Friday and suggested he might not be able to continue, showed hints of discomfort on the way to becoming the second male player to reach 300 Grand Slam match wins.

Fourteenth seed Raonic had never previously taken a set off Djokovic in three previous Grand Slam meetings so when he snatched the second set a surprise looked possible.

But Djokovic, bidding for a record-extending ninth title in Melbourne, responded by raising his level and improving his record over Raonic to 12-0. The Serb will face Germany's Alexander Zverev for a place in the semi-finals.

After the drama of Friday when Djokovic said he had sustained a "tear" and could not move, this was a relatively routine day at the office for the world number one who has been on painkillers for 48 hours.

"It was good enough to compete, to play, I wouldn't be standing here talking if I wasn't in sufficient condition to get on the court and give myself a chance to win a match," Djokovic told Eurosport.

He won the tiebreak in clinical fashion, though, and when Raonic needed treatment on his right ankle early in the second set Djokovic appeared to be well in command.

Instead, Raonic began to play some of his best tennis and secured the first service break of the match at 2-2 with a powerful forehand winner.

That proved enough for Raonic to bag the second set but his victory hopes were soon receding as Djokovic began to swing freely and accelerated through the third set.

The elastic-limbed Djokovic occasionally looked tentative when moving out wide on the forehand side and was stretched in the fourth set but he broke Raonic's serve at 4-4 when his opponent netted a backhand and clinched victory a game later to reach the quarter-finals in Melbourne for the 12th time.

His 300th Grand Slam match win put him behind only Roger Federer (362) in the men's list.

Djokovic will face a potentially tougher challenge against Zverev and said his immediate focus would be on recovering.