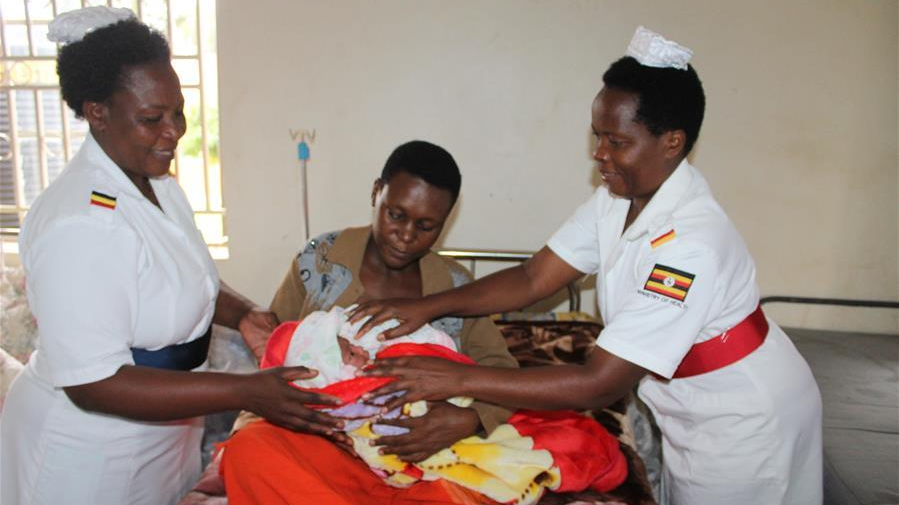 Midwives demonstrate how to help a mother deliver a baby in Mbarara district, Uganda, on May 5, 2019. Uganda joined the rest of the world on Sunday to commemorate the International Day of the Midwife. /Xinhua

Midwives demonstrate how to help a mother deliver a baby in Mbarara district, Uganda, on May 5, 2019. Uganda joined the rest of the world on Sunday to commemorate the International Day of the Midwife. /Xinhua

The world is currently facing a shortage of around 900,000 midwives, with COVID-19 further fueling the situation as many have been redeployed to help plug vital gaps in other health services, according to a new United Nations report.

The 2021 State of the World's Midwifery report, launched on Wednesday by the UN Population Fund (UNFPA), the UN World Health Organization (WHO) and the International Confederation of Midwives, said that fully resourcing midwife-delivered care by 2035 would avert roughly two-thirds of maternal, newborn deaths and stillbirths, saving 4.3 million lives per year.

Natalia Kanem, Executive Director of the UN Population Fund (UNFPA), highlighted the "enormous impact" midwives have on women and their families.

"A capable, well-trained midwife can have an enormous impact on childbearing women and their families – an impact often passed on from one generation to the next."

"At UNFPA, we have spent more than a decade strengthening education, enhancing working conditions and supporting leadership roles for the midwifery profession. We have seen that these efforts work", she added.

The report called on governments to provide an enabling work environment for midwives, free from gender-related stigma, violence and discrimination. It also urged greater investment in the education and training of midwives and midwife-led service delivery, and midwifery leadership and governance.

Appointing senior midwives as leaders at country level would provide a significant lever for building capacity, it noted.

As numbers of midwives increase and they are able to provide care in an enabling environment, women's and newborns' health improves as a whole, benefitting all of society.

The report's 2021 edition – the third in the series – noted, however, that despite previous warnings and presenting a roadmap to remedy the deficit, progress has been very slow. According to latest analysis, at the current rate, the situation would improve "only slightly" by 2030.

Against this background, the report called on Governments and stakeholders to "build back better and fairer" from the pandemic, forging stronger primary health-care systems as a pathway to universal health coverage and fostering a more equitable world for all.

"We must learn the lessons the pandemic is teaching us, by implementing policies and making investments that deliver better support and protection for midwives and other health workers", Tedros Adhanom Ghebreyesus, WHO Director-General, said.