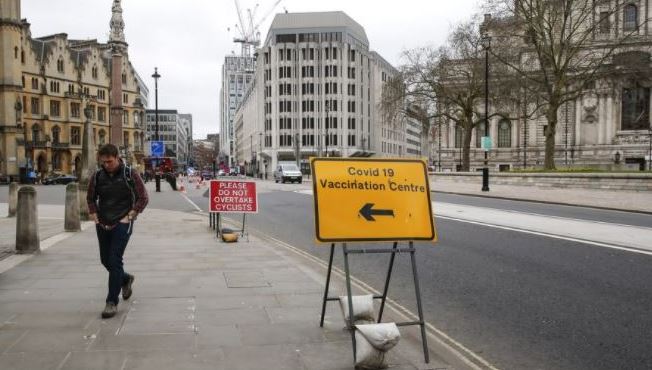 Chief medical officers for England, Scotland, Northern Ireland and Wales on Monday recommended Britain's coronavirus alert level be downgraded from Four to Three as infections and deaths have fallen consistently.

"Thanks to the efforts of the UK public in social distancing, and the impact we are starting to see from the vaccination program, case numbers, deaths and COVID hospital pressures have fallen consistently," the chief medical officers as well as National Health Service (NHS) England national medical director Stephen Powys said jointly in a statement.

"However, COVID is still circulating, with people catching and spreading the virus every day so we all need to continue to be vigilant. This remains a major pandemic globally," they said.

"It is very important that we all continue to follow the guidance closely and everyone gets both doses of the vaccine when they are offered it," they added.

During the peak of the pandemic in winter, Britain was put at the highest alert level of Five when there was a real risk of the NHS becoming overwhelmed.

By late February, as cases and hospitalisations started to fall, the alert was lowered to Four, which meant the epidemic "is in general circulation" and that "transmission is high or rising exponentially".

Level Three suggests the epidemic is "in general circulation", but would mean a gradual reduction in social distancing measures and restrictions.

British Prime Minister Boris Johnson is expected to announce later Monday that England will move ahead with the next phase of lockdown easing from May 17, including households mixing indoors and the return of indoor hospitality.

More than 35.3 million people have been given the first jab of the coronavirus vaccine, according to the latest official figures.

Experts have warned that despite progress in vaccine rollout, Britain is "still not out of the woods" amid concerns over new variants, particularly those first emerged in South Africa, Brazil and India, and the third wave of pandemic on the European continent.

To bring life back to normal, countries such as Britain, China, Russia, the United States as well as the European Union have been racing against time to roll out coronavirus vaccines.