Afghan President Mohammad Ashraf Ghani left the country on Sunday night, while the Taliban ordered its members to enter the capital of Kabul.

The Afghan president has left the nation, Abdullah Abdullah, head of the Afghan National Reconciliation Council, said in a video on his Facebook page, blaming him for putting the country into the current situation.

He also called on the Afghan security forces to maintain law and order of the capital, and asked people in the city to remain calm.

The report came as the Taliban has ordered its forces to enter Kabul city. Zabihullah Mujahid, a Taliban spokesman, tweeted that as the Kabul police abandoned district police stations, the Taliban will enter the city to provide security for the countrymen and ensure law and order.

A curfew has been imposed in Kabul starting 21:00 local time on Sunday to prevent violence.

A negotiation has been underway on Sunday between the Afghan government and the Taliban on the peaceful power transfer to a transitional government. 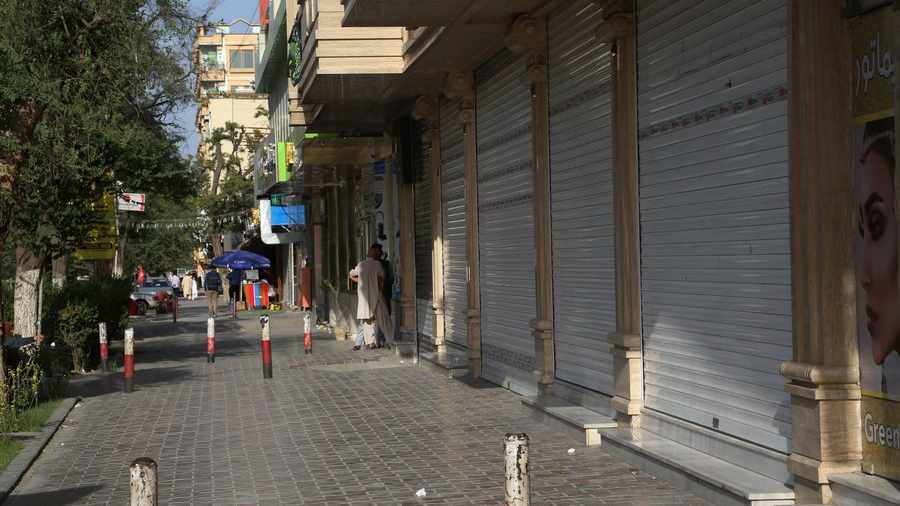 However, two Taliban officials told Reuters on Sunday there would be no transitional government in Afghanistan and the group expects a complete handover of power from the Afghan government.

Reports said that Taliban representatives had arrived at the Presidential Palace earlier Sunday to hold negotiations with the Afghan leadership. Head of the High Council for the National Reconciliation Abdullah Abdullah was reportedly organizing the negotiation, which was said to be intense.

Taliban spokesperson Zabihullah Mujahid told the BBC he could confirm there were talks with the presidential palace about a peaceful takeover of power.

A Taliban spokesman said that the military group expects a peaceful transition of power "in the next few days".

"People should not worry about the safety and security in Kabul," he said.

"No one's life, property and dignity will be harmed and the lives of the citizens of Kabul will not be at risk," the Taliban said in a statement, adding that diplomats and aid workers will have no problems during this period, and the Afghan soldiers can return to their homes.

According to the military group, foreigners could leave kabul or the country through the Kabul airport, or register their stay in the country with the group.

On Sunday, U.S. embassy staff have been evacuated by helicopters, with key members working at the Kabul airport, the only exit route still in the government's hand. The EU staff in Kabul have been transfered to a safe and undisclosed place. Some other Western missions were also busily evacuating their staff, reports said.

Inside the city, offices and buildings were deserted, and shops were shut down. Afghans were rushing to their homes or out of the city to avoid possible fighting in the city.

Earlier on Sunday, Taliban fighters occupied the outskirts of Kabul, and sporadic gun firing could be heard in parts of the city.

The Taliban issued a statement after occupying the outskirts of Kabul, saying they don't plan to take Kabul "by force".

Zabihullah Mujahid, a Taliban spokesman, said that the outfit has ordered its insurgents to stay outside the capital and not to try to enter the city.

Muhahid later tweeted that the militant group took control of Bagram prison at Bagram Airfield, 50 km north of Kabul, and released all inmates.

"All prisoners were released and were transported to a safe place," he said.

The Bagram Airfield, in Bagram district of eastern Parwan province, has served as a main U.S. and NATO forces base for the past 20 years.

Since the U.S. troops started to pull out of Afghanistan from May 1, the Taliban started to launch major offensives on Afghan forces. During the past 10 days, the military group has captured at least 25 provincial capitals of Afghanistan's 34 provinces in its blitz attacks, basically surrounding the capital of Kabul.

U.S. President Joe Biden has defended his decision, saying the U.S. would dispatch 5,000 soldiers to help with the evacuation. A U.S. official said the country is unlikely to change its military strategy in Afghanistan.

Russia is calling for an emergency meeting of the United Nations Security Council to discuss the Afghan issue.