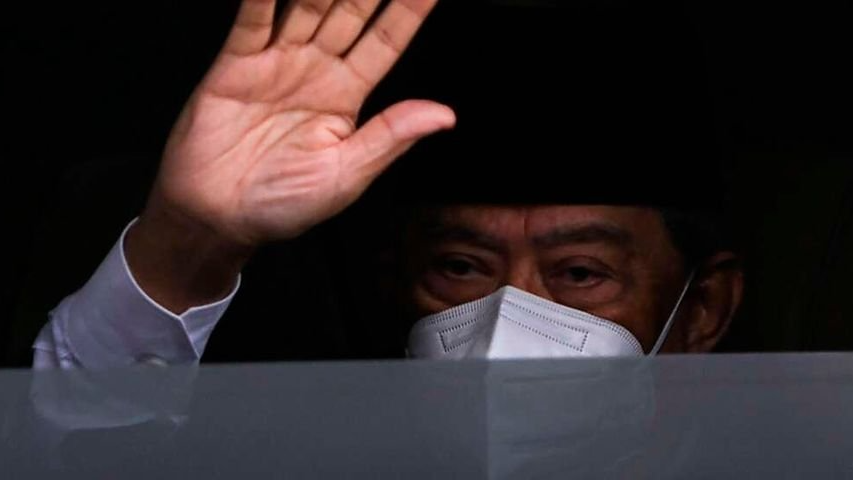 Malaysia's Prime Minister Muhyiddin Yassin waves as he arives at the National Palace in Kuala Lumpur on August 16, 2021, as he was expected to quit after just 17 months in office. /AFP

Malaysia's Prime Minister Muhyiddin Yassin waves as he arives at the National Palace in Kuala Lumpur on August 16, 2021, as he was expected to quit after just 17 months in office. /AFP

Malaysia's prime minister and his government resigned Monday after just 17 months in office, throwing the country into fresh political turmoil as it battles a serious coronavirus outbreak.

Muhyiddin Yassin's tumultuous period in office came to an end after allies withdrew support and a last-ditch bid to cling to power failed, and he becomes the shortest serving premier in Malaysian history.

After a final cabinet meeting, the 74-year-old headed to the national palace to submit his resignation to the king.

Science Minister Khairy Jamaluddin confirmed on Instagram that the entire cabinet had quit.

"Thank you for the opportunity to, once again, serve the nation," he wrote.

Mohamad Redzuan Yusof, a minister in the prime minister's office, confirmed to AFP that Muhyiddin had tendered his resignation, and it had been accepted.

There is no clear successor to Muhyiddin but an election looks unlikely as the country faces its worst COVID-19 wave yet and an economic downturn.

Rather, a period of political horse-trading is expected before a new coalition emerges that can command a majority in parliament.

"His replacement is anybody's guess," said Oh Ei Sun, an analyst at the Singapore Institute of International Affairs.

Malaysia's constitutional monarch formally appoints the premier, and it will be up to him to assess who has sufficient backing from MPs.

Muhyiddin came to power in March last year without an election at the head of a scandal-plagued coalition following the collapse of a two-year-old, reformist government led by nonagenarian political heavyweight Mahathir Mohamad.