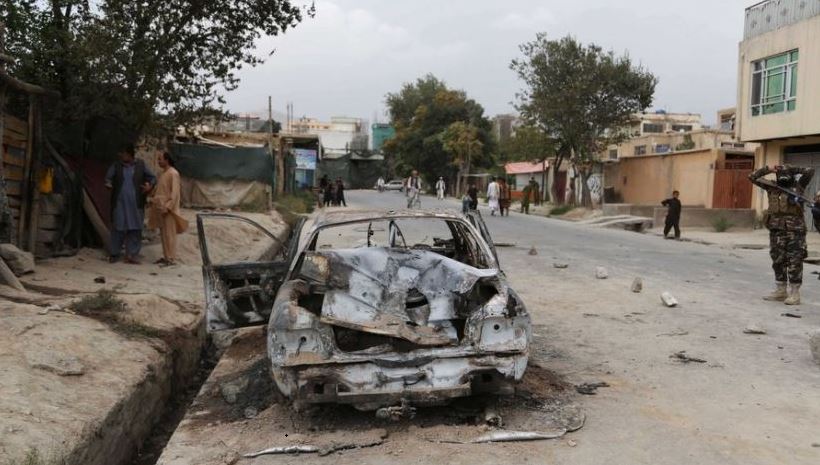 Photo taken on Aug. 30, 2021 shows a damaged vehicle after rockets were fired in Kabul, capital of Afghanistan. (Photo by Kabir/Xinhua)

Photo taken on Aug. 30, 2021 shows a damaged vehicle after rockets were fired in Kabul, capital of Afghanistan. (Photo by Kabir/Xinhua)

The United States on Monday announced the completion of the chaotic, bloody withdrawal of its troops from Afghanistan, ending 20 years of the U.S.-led invasion into the country.

"The cost was 2,461 U.S. service members and civilians killed and more than 20,000 who were injured," U.S. Central Command head General Frank McKenzie told reporters during a news conference held by the Department of Defense.

About 47,600 civilians have been killed and more than double that number injured in Afghanistan during the 20 years of war, according to figures by the Watson Institute for International and Public Affairs at Brown University.

"It's a mission that brought Osama bin Laden to a just end, along with many of his Al-Qaeda co-conspirators. And it was not a cheap mission," said McKenzie.

On Thursday, 13 U.S. soldiers and at least 170 Afghans were killed and about 200 wounded in a suicide bombing near a gate of the Kabul airport.

ISIS-K, a local affiliate of the Islamic State group, claimed responsibility for the bombing. Meanwhile, some survivors have raised the possibility that a number of Afghan people were actually killed by American fire amid the chaos and confusion instead of by bombing.

According to the United Nations (UN) Refugee Agency, 550,000 people have been forcibly displaced inside Afghanistan this year, joining 2.9 million others already internally displaced across the country at the end of 2020, and 2.6 million Afghans have fled to other countries over the past decades.

McKenzie acknowledged that the U.S. military "did not get everybody out that we wanted to get out" while estimating that American citizens remaining in Afghanistan numbered "in the very low hundreds."

Biden has been under scrutiny over his handling of the withdrawal from Afghanistan. He denied America's allies questioning the country's credibility over the hasty evacuation, during which scenes of Afghans clinging to the sides of U.S. aircraft dominated global media.

"President Biden appears to have broken his promise to stay in Afghanistan until every American is evacuated," commented Fox News in a report on Monday.

Biden, who has been widely criticized for botched exit from Afghanistan, said he will address the American people Tuesday afternoon on this withdrawal.

"For now, I will report that it was the unanimous recommendation of the Joint Chiefs and of all of our commanders on the ground to end our airlift mission as planned," he said.

"Their view was that ending our military mission was the best way to protect the lives of our troops, and secure the prospects of civilian departures for those who want to leave Afghanistan in the weeks and months ahead," said Biden.

The U.S. troops, he said, has executed "the largest airlift in U.S. history" during the past 17 days, evacuating over 120,000 U.S. citizens, citizens of the U.S. allies, and Afghans who have worked for the United States during the last two decades. 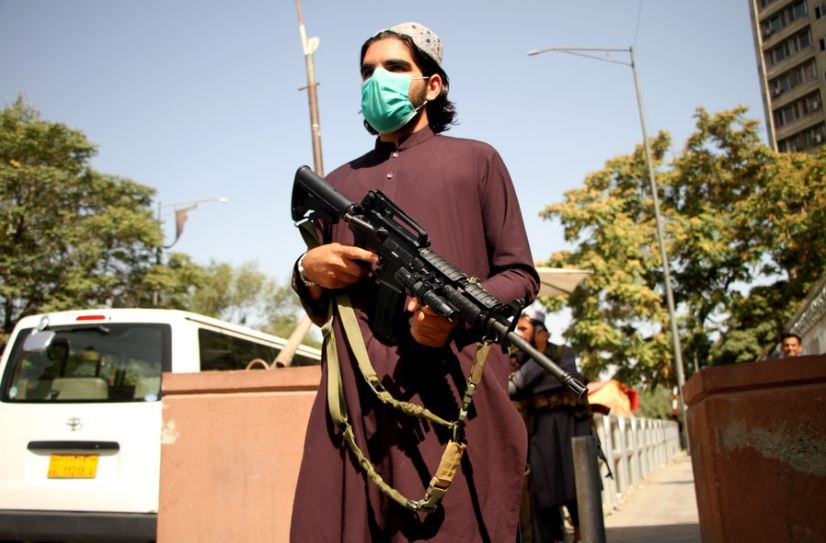 U.S. Secretary of State Antony Blinken said Monday that the U.S. Embassy in Kabul will remain shuttered and vacant for the foreseeable future.

"First, we built a new team to help lead this new mission. As of today, we suspended our diplomatic presence in Kabul and transferred our operations to Qatar that will be notified to Congress. Given the uncertain security environment and political situation in Afghanistan, it was the prudent step to take," he said.

Blinken said that for the time being, the United States will use this post in Doha, Qatar, to "administer humanitarian assistance and work with allies and partners to coordinate engagement and messaging to the Taliban."

Fewer than 200 Americans who want to leave remain in Afghanistan and the United States will continue to try to get them out, he said.

Sourabh Gupta, a senior fellow at the Institute for China-America Studies, said the Biden administration needs to work constructively with the Taliban to ensure stability to Kabul and Afghanistan as a whole.

"From a longer term perspective however, regional states will need to cooperate with each other, and the Taliban, to ensure that terror, separatism and extremism does not radiate out from the Afghan soil," Gupta told Xinhua in an interview.

However, most Americans have shown a lack of confidence. A USA TODAY/Suffolk University Poll released Tuesday found that three of four participants believe Afghanistan will once again be used as a sanctuary for terrorists that target the United States.

After 20 years of U.S. military operation in Afghanistan, militant groups now active in the country have grown to over 20, including the Islamic State.

The Taliban welcomed the U.S. withdrawal from Afghanistan shortly after the U.S. Central Command announced that its withdrawal has completed on Tuesday.

Noting that the last U.S. soldiers were evacuated from Kabul airport at mid-night on Monday, Taliban spokesman Zabihullah Mujahid tweeted, "In this way, our country became completely free and independent."

The UN Security Council on Monday adopted a resolution on Afghanistan, focusing on counter-terrorism and humanitarian assistance.

Resolution 2593 demands that Afghan territory not be used to threaten or attack any country, or to shelter or train terrorists, or to plan or finance terrorist acts.

It reiterates the importance of combating terrorism in Afghanistan and notes the Taliban's relevant commitments.

The resolution also calls for strengthened efforts to provide humanitarian assistance to Afghanistan.

It calls on all parties to allow full, safe, and unhindered access for the United Nations, its specialized agencies and implementing partners, and all humanitarian actors engaged in humanitarian relief activity, to ensure that humanitarian assistance reaches all those in need.

"The chaos in Afghanistan is directly related to the hasty and disorderly withdrawal of foreign troops," Geng Shuang, China's deputy permanent representative to the United Nations, told the Security Council.

"We hope that relevant countries will realize the fact that withdrawal is not the end of responsibility, but the beginning of reflection and correction," he said, while urging them to learn from the lessons, and truly respect the sovereignty, independence and territorial integrity of Afghanistan, and the rights of the Afghan people to determine their own future.