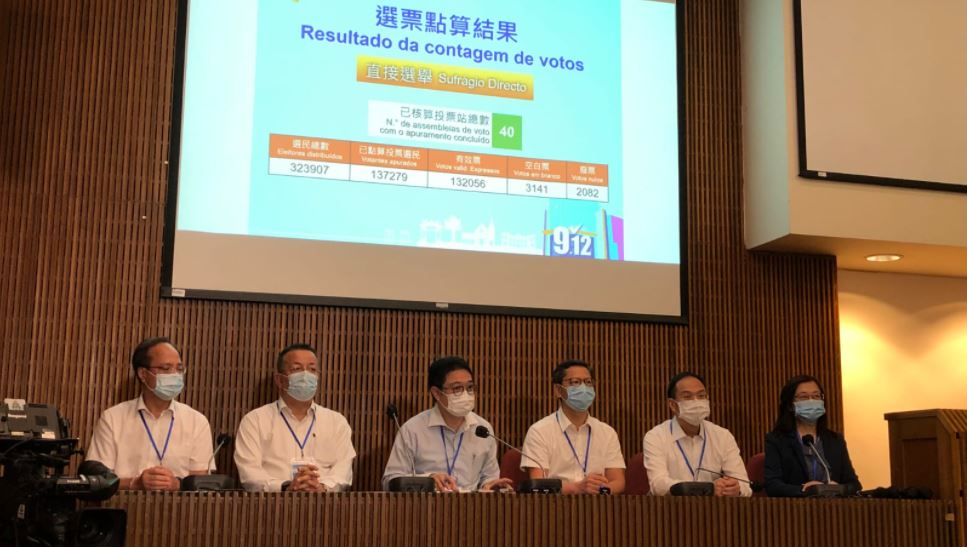 The electoral affairs commission of the Macao Special Administrative Region (SAR) announced the preliminary results of the election of the seventh Legislative Assembly early Monday morning.

The election of the seventh Legislative Assembly of Macao SAR kicked off on Sunday morning.

In line with the Basic Law, the new legislature is composed of 33 seats: 14 directly-elected seats, 12 indirectly-elected seats and seven others who will be appointed by the SAR's chief executive. The term of office of the seventh Legislative Assembly will start in October 2021.

Macao government thanks voters and staff

The Macao SAR government on Sunday night expressed its gratitude toward voters and staff working for the seventh Legislative Assembly election.

The election was successfully held in a smooth and orderly way, the SAR government said in a statement, adding that the vote took place in a lawful, fair, open and clean manner.

The election was held amid a challenging situation in Macao and neighboring cities brought by the COVID-19 pandemic, the government said.

"Not only is it necessary to ensure the election is held in a lawful and orderly way, but the event also has to be organized in strict adherence to anti-epidemic guidelines issued by the health bureau. In addition, on the election day, the weather is very hot with rain showers," it said.

Under such circumstances, over 100,000 voters cast their ballots on Sunday to exercise civic duty, the SAR government said, expressing its gratitude for their involvement.

The government also thanked the civil servants who ensured the electoral arrangements and other related logistics were carried out.

Macao residents have actively participated in the election in an orderly manner and exercised their right to vote in accordance with the law, which fully demonstrates the successful practice of "One Country, Two Systems" with Macao characteristics, the spokesperson said.

The Liaison Office of the Central People's Government in the Macao Special Administrative Region (SAR) also extended their congratulations on Monday.

The seventh Legislative Assembly election in the Macao SAR has fully implemented the fundamental principle of "patriots administering Macao," said a spokesperson with the liaison office. The candidates have shown their duties of loving the motherland and loving Macao, and actively made preparations and participated in the election, the spokesperson added.

The election was conducted in a clean, harmonious and orderly way, the spokesperson said, adding that the seventh Legislative Assembly election has shown the spirit of law-based governance in the Macao SAR.