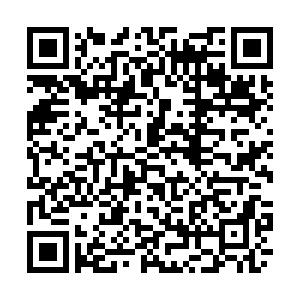 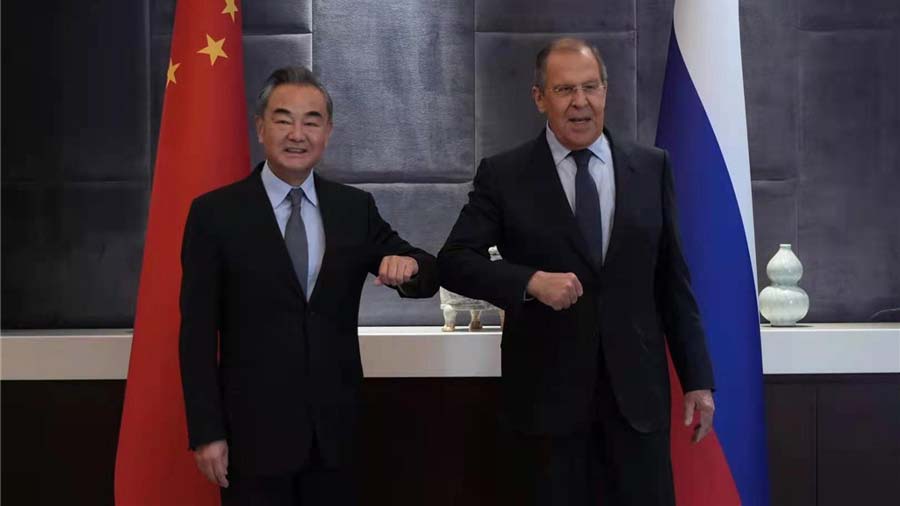 During a meeting with his Russian counterpart Sergei Lavrov on Thursday, Wang said China is ready to strengthen coordination with Russia to jointly handle the issue of Afghanistan.

Wang said China appreciates Russia's opposition to the politicization of COVID-19 origins-tracing and human rights issues, and is willing to deepen back-to-back strategic coordination with Russia to promote cooperation among the international community in tackling the virus origins.

He called on Russia to communicate and coordinate with China within the framework of the Shanghai Cooperation Organization, to jointly maintain peace and prosperity in the Asia-Pacific region, and to work together to respond to various global challenges.

Wang noted that the two countries' foreign ministers jointly attended an event marking the 76th anniversary of their victory in World War II and made a loud voice that history cannot be tampered with and the truth cannot be obliterated.

He noted that China supports Russia in taking a development path that suits its national conditions, supports Russia's measures to safeguard its political power and sovereignty and is willing to work with Russia to safeguard the victory of World War II and safeguard international fairness and justice.

On his part, Lavrov said that the commemoration held by Russia and China for the victory in World War II had once again proved the unbreakable friendship and indestructible partnership between the two countries.

He urged the two countries to continue advancing cooperation in the fight against the COVID-19 pandemic, to promote pragmatic exchanges, and to expand the scale of trade.

The Russian foreign minister noted that his country firmly supports China's position on the issues of Xinjiang, Hong Kong, Tibet and human rights.

He also said Russia wants to join hands with China on multilateral platforms such as the United Nations in addressing such global issues as information security, biosecurity, and cybercrime and keep close coordination and cooperation on Asia Pacific affairs. 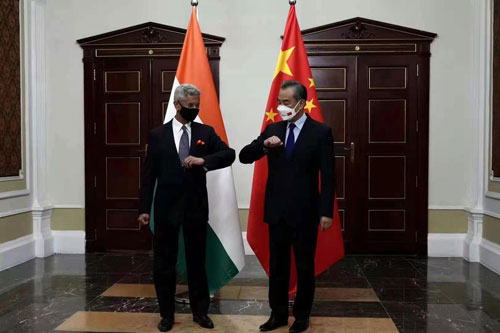 Hailing the effective communication between the diplomatic and military departments of the two countries, the Chinese foreign minister said the situation at the border is cooling down and urged the Indian side to meet China halfway, promote stability in the area and gradually move from emergency response toward regular management and control.

The Chinese foreign minister also called on the two major emerging economies to adhere to the strategic consensus that China and India pose no threat but offer development opportunities to each other, and to push bilateral practical cooperation to a healthy and stable development track.

This is not only in the common interests of both countries, but also conducive to regional and world peace and development, Wang added.

Jaishankar said that India and China have made progress in dealing with the border situation, while there are still some issues to be resolved.

India is willing to work with China to abide by their bilateral agreement, promote a positive mindset for the next round of corps commander level meetings between the two countries, and effectively maintain peace and tranquility in the border area, he added.

The Indian foreign minister voiced the hope that both sides will work together to put India-China relations back on the right track. 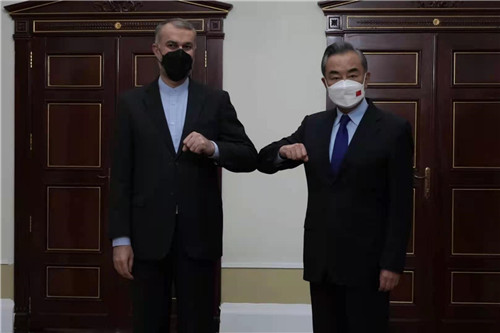 When meeting with Iranian Foreign Minister Hossein Amir Abdollahian on Thursday, Wang said China firmly supports Iran in opposing hegemony and safeguarding its sovereignty, dignity, legitimate rights and interests, adding that China is willing to work with Iran to implement a bilateral comprehensive cooperation plan and promote cooperation in jointly building the Belt and Road and in such fields as energy and resources.

China will continue to provide assistance to Iran in fighting the COVID-19 pandemic and supports Iran in becoming a full member of the Shanghai Cooperation Organization (SCO), he said.

China is willing to work with Iran to strengthen coordination and cooperation on regional and international affairs, keep negotiations on the Joint Comprehensive Plan of Action in the right direction and reach consensus on it at an early date, jointly promote the establishment of an inclusive political structure in Afghanistan, and take concrete actions to combat all forms of terrorism, he added.

Amir Abdollahian said that Iran-China relations have strategic significance and a solid foundation. The new Iranian government is willing to work with China to thoroughly implement a comprehensive cooperation plan between the two countries and accelerate cooperation in such areas as transportation, energy, culture, technology, and tourism.

Iran appreciates China's great help with its fight against the COVID-19 pandemic and hopes to further strengthen vaccine cooperation, he said.

The new Iranian government attaches importance to neighboring countries and Asia, appreciates China's support for Iran to become a full member of the SCO, and is willing to strengthen communication and coordination with China on the Iranian nuclear issue, the Afghanistan issue and others, he added.

On the same day, Wang also met with Belarusian Foreign Minister Vladimir Makei and Kazakh Foreign Minister Mukhtar Tileuberdi. He vowed to enhance cooperation with the two countries, especially in the fight against COVID-19.