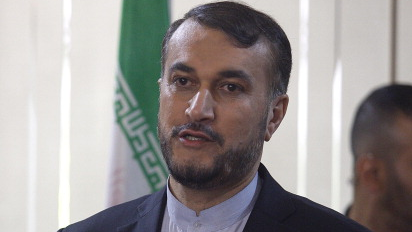 Mehr said Tuesday's meeting on the sidelines of the U.N. General Assembly was attended by Foreign Minister Hossein Amirabdollahian and "foreign ministers and senior representatives" of countries including Saudi Arabia, Kuwait, Qatar, Egypt, Jordan, Turkey and France, as well as the European Union, the Arab League and the Gulf Cooperation Council.

Iran's foreign ministry said on Twitter that Amirabdollahian had on Tuesday had what it called a follow-up meeting to a meeting he held during a conference in Baghdad on Aug. 28.

It did not say who attended on Tuesday apart from Amirabdollahian, or what was said. But his visit to Baghdad in August included a meeting with Gulf Arab officials.

Iraq, which has been trying to mediate between Tehran and its Gulf Arab foes, chaired the meeting at its ambassador's residence in New York, Mehr said.

"Our gathering underscores the fact that only diplomacy and dialogue can end crises, misunderstandings and differences," Mehr quoted Amirabdollahian as saying. "The priority of the new government of the Islamic Republic of Iran is to strengthen and develop relations with its neighbors and the region."

Iran and Saudi Arabia broke off diplomatic ties in 2016.

Amirabdollahian met separately with EU foreign policy chief Josep Borrell, whom he assured of Iran's "willingness to resume negotiations at an early date," the EU said on Wednesday.

The meeting was scheduled on the sidelines of the annual U.N. gathering of world leaders in the absence of a ministerial meeting of the parties to the 2015 deal limiting Iran's nuclear program.

The world powers have held six rounds of indirect talks between the United States and Iran in Vienna to try to work out how both can return to compliance with the nuclear pact. Talks were suspended two days after hard line cleric Ephraim Raisin was elected Iran's president in June.