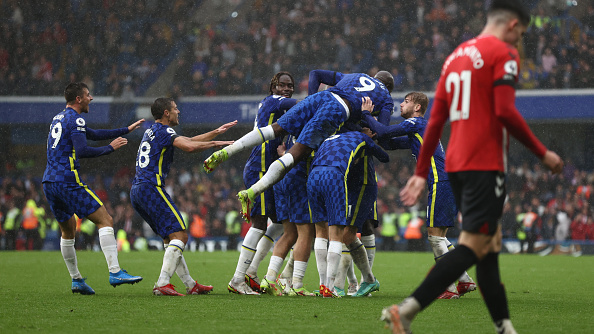 Ben Chilwell of Chelsea (obscured) celebrates with teammates after scoring their team's third goal during the Premier League match between Chelsea and Southampton at Stamford Bridge in London, England. /Getty Images

Ben Chilwell of Chelsea (obscured) celebrates with teammates after scoring their team's third goal during the Premier League match between Chelsea and Southampton at Stamford Bridge in London, England. /Getty Images

Timo Werner and Ben Chilwell scored in the last six minutes of normal time to give Chelsea a 3-1 win against 10-man Southampton at Stamford Bridge on Saturday to go two points clear at the top of the English Premier League.

Trevor Chalobah broke the deadlock in the ninth minute heading in at the far post from a flick-on by Ruben Loftus-Cheek following a corner.

Romelu Lukaku had the ball in the net in the 36th minute but his effort was ruled out as the linesman had flagged him for being offside.

The home side again thought they had doubled their lead four minutes before halftime when Werner headed the ball into the net from Callum Hudson Odoi's cross but the goal was ruled out by VAR following a foul by Cesar Azpilicueta in the build-up.

That prompted a furious reaction from Chelsea coach Thomas Tuchel who was then booked by referee Martin Atkinson.

Southampton were awarded a penalty on the hour mark after a challenge from Ben Chilwell on former Chelsea player Tino Livramento. Southampton captain James Ward-Prowse converted the penalty to make it 1-1.

However, the game swung in Chelsea's favour after Ward-Prowse was sent off in the 75th minute after a VAR check for a dangerous tackle on Jorginho.

Chelsea pressed their advantage and were rewarded six minutes from the end of normal time when Werner tapped in Azpilicueta's low cross.

Chilwell then put the game out of reach with an excellent volley which crossed the line despite a valiant attempt by Saints goalkeeper Alex McCarthy after Lukaku and Azpilicueta both hit the woodwork.

Chelsea leads the standings with 16 points, two ahead of Liverpool, who have a game in hand, Manchester United and Everton, who also have 14 points.

Earlier on Saturday, Andros Townsend cancelled out Anthony Martial's strike as Everton came from a goal down to draw 1-1 with United at Old Trafford.

In other games, Norwich gained their first point of the season following a goalless draw at Burnley,  a double from South Korea's Hwang Hee-Chan gave Wolves a 2-1 win against Newcastle United and Leeds edged Watford 1-0.

Liverpool, the only unbeaten team in the league, will host defending champions Manchester City at Anfield on Sunday knowing a win will take them top of the table.