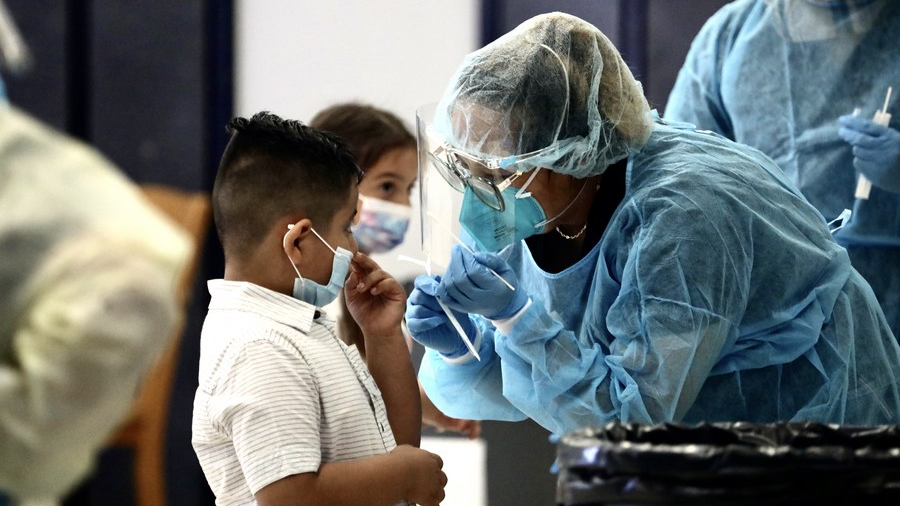 The United States is making progress against the current surge of the COVID-19 pandemic, but the country is not out of the woods yet, the medical advisor to the White House Anthony Fauci told ABC on Sunday, two days after the national death toll of the coronavirus surpassed the grim milestone of 700,000.

"We certainly are turning the corner on this particular surge," said the nation's top infectious disease expert. "But we have experienced over now close to 20 months surges that go up and then come down, and then go back up again. The way to keep it down, to make that turnaround continue to go down, is to do what we mentioned: get people vaccinated."

"When you have 70 million people in the country who are eligible to be vaccinated, who are not yet vaccinated, that's the danger zone right there," added Fauci. "So it's within our capability to make sure that that turnaround that we're seeing, that very favorable and optimistic turnaround, continues to go down and doesn't do what we've seen multiple times before, where it goes down and then it comes back up."

The United States has seen its first notable decline in COVID-19 metrics in more than three months, with coronavirus-related hospital admissions and average daily new cases dropping by more than 30 percent over the last month, reported the television network.

American Airlines, Alaska Airlines and JetBlue are joining United Airlines in requiring employees to be vaccinated against COVID-19, as the administration of U.S. President Joe Biden steps up pressure on major U.S. carriers to require the shots, reported CNBC on Saturday.

The airlines provide special flights, cargo hauling and other services for the government. The companies said that makes them government contractors who are covered by Biden's order directing contractors to require that employees be vaccinated.

"Our vaccine requirement for NYC school staff has now been reviewed in state courts, federal courts, and the Supreme Court and upheld," Dave Chokshi, the city health commissioner, tweeted in response to the news. "Vaccination will keep students and staff safer."

Except for school staff, health workers make up the front groups that need to be vaccinated. In New York State, as of Thursday, 92 percent of its more than 625,000 healthcare workers were inoculated, up from the 73 percent on Aug. 16 when the Sept. 27 deadline was set for vaccinations, according to Governor Kathy Hochul.

Since former Governor Andrew Cuomo announced a vaccine mandate for New York healthcare workers more than a month ago, hospital employees in the state have been getting vaccinated at more than twice the rate as all New York adults, according to data provided by the state health department and the CDC.

The CDC released recommendations on Saturday for the upcoming holiday season, including the idea of using a window fan to keep air at an indoor party as fresh as possible.

The agency appears to be suggesting that circulating air indoors can ward off the airborne coronavirus, or at least reduce its chances of spreading during home gatherings.

"If celebrating indoors, bring in fresh air by opening windows and doors, if possible," said its holiday celebrations guidance. "You can use a window fan in one of the open windows to blow air out of the window. This will pull fresh air in through the other open windows."

Earlier this week, a CDC study found that schools without masking requirements are 3.5 times more likely to have a COVID-19 outbreak than those that required masking when the school year began.

After analyzing data from almost 1,000 K-12 public schools in Maricopa and Pima counties in Arizona, the researchers highlighted the importance and effectiveness of mask mandates in preventing COVID-19 infections in schools.

"Until all children are eligible to receive COVID vaccines, masking is the next best defense against contracting and spreading the SARS-CoV-2 virus," Yale Medicine pediatrician Leslie Sude was quoted by the health information portal Verywell as saying.