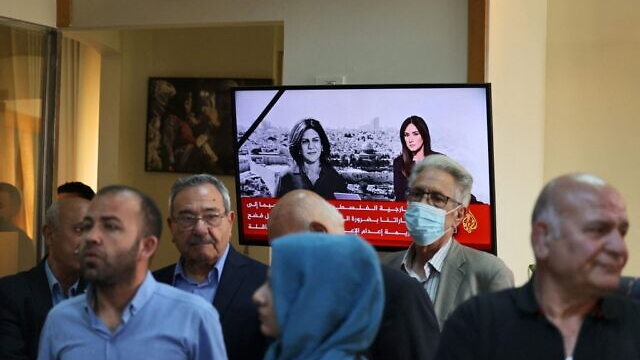 The late Al Jazeera journalist Shireen Abu Akleh in the screen on the background. /AFP

The late Al Jazeera journalist Shireen Abu Akleh in the screen on the background. /AFP

The Palestinian Authority on Thursday said its investigation into the shooting death of Al Jazeera journalist Shireen Abu Akleh proves she was deliberately killed by Israeli forces.

The Palestinian attorney general, Akram Al Khateeb, announced the results of the investigation at a news conference in the West Bank city of Ramallah.

"The only shooting was by the occupation forces, with the aim of killing," he said.

Abu Akleh, a veteran Palestinian-American reporter for Al Jazeera's Arabic service, was shot in the head on May 11 during an Israeli military raid in the occupied West Bank.

Witnesses and Palestinian officials have said she was hit by Israeli fire. Israel says she was shot during a battle between its soldiers and Palestinian militants. It says that only a ballistic analysis of the bullet which is held by the Palestinian Authority and the soldiers' guns can determine who fired the fatal shot.

Al Khateeb said his investigation had determined there were no militants in the area and claimed the army saw Abu Akleh and other journalists and knew they were journalists. The group were all wearing protective vests and helmets at the time.

He claimed that Abu Akleh was shot "directly and deliberately" as she tried to escape.

He repeated the Palestinian position that the bullet will not be handed over to the Israelis for study. He said they decided not even to show images of the bullet "to deprive them of a new lie."

There was no immediate response from Israel.