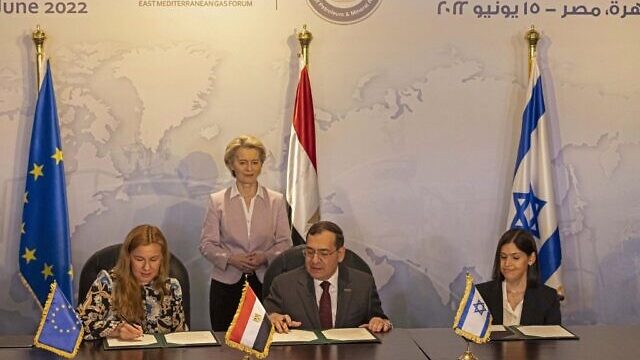 The European Union has signed a deal with Israel and Egypt where Israel will export its natural gas to the block for the first time.

The Wednesday landmark agreement that was inked in Cairo will increase liquified natural gas sales to EU countries, which are aiming to reduce dependence on supply from Russia in the wake of its military campaign in Ukraine.

Last year, the EU imported roughly 40 percent of its gas from Russia. It has faced energy difficulties since imposing sweeping sanctions on Moscow.

The agreement will see Israel send gas via Egypt, which has facilities to liquify it for export via sea.

Energy Minister Karine Elharrar said the signing of the MOU had cemented Israel's role on the global energy stage.

"This is a tremendous moment in which little Israel is becoming a significant player in the global energy market," Elharrar said.

"The memorandum of understanding will allow Israel to export natural gas to Europe for the first time, and it is even more impressive when one looks at the string of significant agreements we have signed in the past year, positioning Israel and the Israeli energy and water economy as a key player in the world,” she said.

"This is a statement to those who see in our region only negative forces such as division and conflict,” she said. "This MOU shows us that we are paving a new path of partnership, solidarity and sustainability.”

Von der Leyen said the agreement would help the bloc move away from its dependence on Russia.

"What a special moment," she said. "I very warmly welcome the signing of this historic agreement.”

She said the agreement was part of Europe's efforts to diversify energy sources away from Russia and import hydrocarbons from "other trustworthy suppliers" naming Israel and Egypt, which have emerged as gas exporters in recent years following major offshore discoveries.