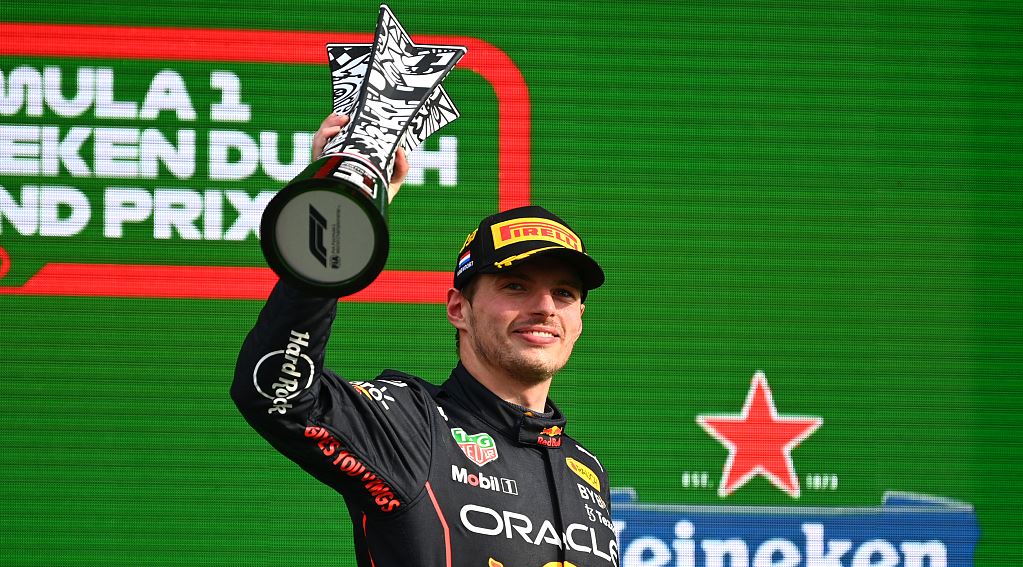 Race winner Max Verstappen of the Netherlands and Oracle Red Bull Racing celebrates on the podium during the F1 Grand Prix of The Netherlands at Circuit Zandvoort on September 04, 2022 in Zandvoort, Netherlands. /Getty Images

Race winner Max Verstappen of the Netherlands and Oracle Red Bull Racing celebrates on the podium during the F1 Grand Prix of The Netherlands at Circuit Zandvoort on September 04, 2022 in Zandvoort, Netherlands. /Getty Images

Red Bull's Max Verstappen won the Dutch Grand Prix on Sunday to further extend his lead at the top of the driver's standings.

The win, his fourth consecutive and tenth in total this season, took his points tally to 310, far ahead of Ferrari's Charles Leclerc who currently has 201.

Mercedes' George Russell took second place ahead of Leclerc, both drivers overtaking Lewis Hamilton in the latter stages of the race to clinch the podium places.

Verstappen stayed ahead for much of the race, having started on pole position, but a Safety Car on Lap 48 offered a new challenge for him, as he pitted for a second time for softs and emerged third behind Hamilton, who was ordered to stay out.

At the restart however, the Dutch driver made easy work of Hamilton, who did not hold back from making his feelings known to his team.

The Briton ended up taking fourth place, just ahead of the second Ferrari car of Carlos Sainz.

Verstappen's teammate Sergio Perez settled for sixth, after some hard defending from Sainz in the final laps of the race.

A five-second penalty for an unsafe release however saw the Ferrari driver drop to eighth place behind Alpine's Fernando Alonso and McLaren's Lando Norris.

At the end of the race, Verstappen expressed his delight at taking victory in his home Grand Prix.

"It was not a straightforward race. We had to push the whole race. Of course, with Safety Car, the Virtual Safety Car making the right calls, it was always a bit of question mark but it worked out really well once we got back to the soft tyres, we had great pace again," he said.

"It's always special to win your home Grand Prix, it was already last year. This year I have to say I had to work for it even more. So yeah, an incredible weekend and really happy we got the Dutch Grand Prix."

Next up for the drivers is the Italian Grand Prix on September 11.